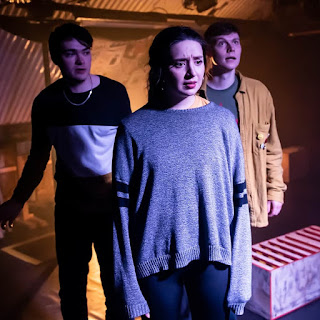 
As a reviewer to get a pull-quote on the poster for a production is very gratifying. So when I read my thoughts about Chalk Line Theatre on the pre-publicity for The Nobodies at the Vaults festival - ‘an original new company who are seriously on top of their game’- I was indeed flattered, and slightly worried. But having seen their stunning new production, my fears were unfounded. This was indeed a company seriously on top of their game, and a whole lot more as well!
This was sixty minutes of fast-paced, totally relevant and brilliantly crafted theatre. Amy Guyler has written a smart, gutsy story about a trio of vigilantes which is appealing, wonderfully engaging and with unquestionable heart.
Shamelessly quoting the synopsis, ‘When a local hospital announces its closure, panic ensues. Healthcare Assistant Rhea (Lucy Simpson) is forced to look for work elsewhere. Local lad Aaron (David Angland) worries about his mum’s treatment in the cancer unit. And Curtis (Joseph Reed) just isn’t sure where he’s going to sleep.
‘But when the three witness a horrific accident, a rare opportunity presents itself.
‘As a dangerous decision triggers a wild chain of events, Rhea, Aaron and Curtis soon find themselves gathering power, influence and infamy – and inspiring a cohort of vigilante activists.’
And the birth of the Nobodies seamlessly ensues. All chance activists that soon assemble an ever-expanding posse of like-minded people willing and surprisingly able to effect serious change and rally a wonderfully supportive gathering of followers.
The Chalk Line comrades as they are described in the programme are, it would seem, a very tight group of creatives. Directors Sam Edmunds and Vikesh Godhwani have crafted a joyous piece of theatre that is breathlessly well-conceived. It barely misses a heartbeat in the captivating storytelling. Without a doubt, their vision is safe in the characterisations so beautifully realised in the ensemble that is Angland, Reed and Simpson – all seriously talented young actors, absorbing to watch, precise with a strong sense of physicality as they developed not only their named but also the supporting ensemble of characters.
The Nobodies had me hooked from the beginning and would have willingly signed-up for any misdemeanour offered in their published manifesto in support of the cause! I must admit, I might have struggled with private schools but that’s another story!
My admiration for The Nobodies and Chalk Line is genuine and my enthusiasm for their work is undiminished. Second album syndrome has not struck here and would rather say that they have grown even stronger and can only once again look forward!
The Nobodies was due to be at Edinburgh Fringe this year but sadly will not be there due to the unprecedented circumstances. But I understand a tour is now being planned for later this year and can only hope that includes a longer stay at a London venue. So when the chance arrives, I would urge you, don’t miss it!
Designer - Becca White
Lighting Designer - Alan Walden
Sound Designer - Mekel Edwards
Stage Manager - Richard Gunston
Chalk Line Theatre Joseph Reed Lucy Simpson Sam Edmunds The Nobodies Vaults Festival Vikesh Godhwani David Angland