The Importance of Being Earnest - a ★★★★★ masterwork! 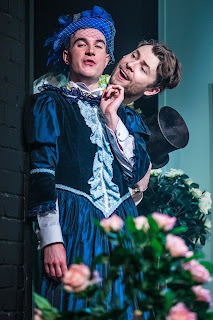 The Importance of Being Earnest
or A Trivial Comedy for Serious People
It seems only appropriate that The Importance of Being Earnest opened last week at London’s Turbine Theatre on the 125th anniversary of Oscar Wilde’s undoubted classic work. Coming directly from Cirencester’s Barn Theatre, the production arrives as a two-man re-imagining of this witty, wonderful Wildean epigrammatic masterwork.
For those unfamiliar with the plot, this is the one about the handbag! Simply put, it’s a farcical comedy in which the major protagonists – John/Jack/Ernest Worthing and Algernon Moncrieff - maintain fictitious characters to escape onerous social obligations. Working within the social conventions of the time, the play's major themes are the triviality with which it treats institutions as solemn as marriage, and the resulting satire of Victorian ways.
We also encounter Gwendolen Fairfax, Cecily Cardew, Miss Prism, Reverend Canon Chasuble, Lane, Merriman and Lady Bracknell of handbag fame! The relevance of this joyous ensemble of ten only becomes significant when we discover that all these characters will be played at tonight’s performance by only two actors!
By some terrible quirk of fate, the members of Battersea Dramatic Society – apologies if the name is incorrect – have been delayed due to problems with their bus. Adhering to the old adage that the show must go on, Graham de Hare, producer and Kevin McKinnon, stage manager decide to go on in their stead.
And go on indeed they do! Ryan Bennett as de Hare and Aidan Harkins as Kevin McKinnon give sublime, inventive performances as they play every member of the doomed company. They are not only incredible as they positively devour every jot, tittle and hysterical nuance of Wilde’s 22,000-word script but also heroically capture every trait, whilst seamlessly, and instantaneously, changing costumes – a feat of incredible stamina and a joy to behold. Quite brilliant, awe-inspiring, magical and decidedly unique!
Bryan Hodgson’s exquisite direction has shaped a production that is ingenious, riotous, fast-paced, indefatigably physical but, above all, hysterically funny.
At this point, it is imperative to mention Denise Cleal, simply described in the programme as wardrobe supervisor. This must be the understatement of the year as she truly achieves theatrical magic amidst this resourceful mayhem.
Further, there is a spectacular choreographic master-class at the bows, where we were treated to tap-dancing, flossing, voguing,  all forms of tango to name but a few. Truly a genuine laugh-out-loud finale!
The Importance of Being Earnest is a serious heady cocktail, imagined by head mixologist (and uncredited choreographer, if I’m not wrong), Bryan Hodgson, and only achieved with those rarest of genius ingredients, Ryan Bennett and Aidan Harkins.
Please head down to the Turbine and don’t miss Earnest! But with one word of warning for those not arriving in chauffeur-driven limo, the bus stop nearest the theatre is closed!


The Importance of Being Earnest is playing at The Turbine Theatre
until 29 February 2020
Tickets: https://turbinetheatre.londontheatrebookings.com/WEBPAGES/EntaWebShow/ShowListAlpha.aspx?LR=10&start=*&LC=10