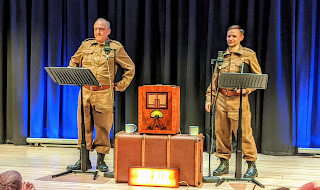 
Sitting in the theatre at the British Library on a wet Friday night at the end of January, there was a sense that something special was in the air. Yes, it was only four hours until we Brexited Europe, but more exciting this was the first date of Dad’s Army Radio Show.
The tour, featuring three classic TV episodes – ‘When You’ve Got To Go’, ‘My Brother and I’ and ‘Never Too Old’ - were never performed on the radio but have been newly-adapted *, by the stars of the show, David Benson and Jack Lane.
How may you ask - as a lot of the audience I’m sure did - can two actors bring to life the entire dysfunctional platoon of Wilmington-on-Sea’s finest, plus a whole lot more? Don’t panic, the simple answer is quite brilliantly. Benson and Lane are vocal superstars who give performances of linguistic dexterity that are second to none. Arthur Lowe and John Le Mesurier as the evergreen stalwarts, Mainwaring and Wilson, are comedy perfection. But seamlessly entwined, without any sense of hesitation or even an errant breath, we are gifted Pike, Mrs Pike, Jones, Frazer, Mrs Mainwaring, Walker, and Godfrey. And Reverend Timothy Farthing took on special relevance at last night’s performance as Frank Williams who played the part was sitting in the front row, immediately in front of David Benson, who carried on manfully!
Dad’s Army quite rightly maintains a great nostalgia and affection in the hearts of a diverse age group of Brits - witness the audience at last night’s performance. This is timeless comedy and even in this simply-produced incarnation maintains, while enhancing its sublime, joyous perfection.
With an upcoming extended nationwide tour, don’t miss Dad’s Army Radio Show.  It is, and will always remain, an integral part of our cultural, and undoubted comedy heritage!


* with special permission by the Estates of David Croft and Jimmy Perry.