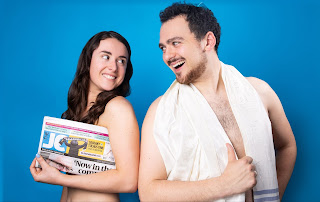 
Poppy Damon and Saul Boyer have written a seriously fast-paced, zany comedy, which has arrived for a brief sojourn at London’s Kings Head Theatre. Purporting to be ‘the rom-com that nobody asked for’, Jew...ish is this and a whole lot more.
This totally original story tells the trials, tribulations and familial machinations in life and death of TJ and Max, who are in love. With whom, or what, we are unsure but, not so incredibly, it is soon apparent that each other is a pretty sure bet. But - if it is really still a but - Max is Jewish and TJ isn’t. This is the perfect set up for a whole host of cultural knock about, some maybe stereotypical but why let a stereotype get in the way of a good laugh!
Family, mothers, grandmothers, death, funerals, matchmaking and the quintessential wife for a beloved grandson are all subjects for rich plunder. And plunder they are, quite wonderfully, with great verve, tremendous vitality and inventiveness.
Newman and Boyer give performances that are, without a doubt, honed to perfection and an hysterical exposition of madcap love. Their timing, nuance and undoubted physicality propels the development of these two some-what flawed characters from frustration to joy. Intrinsic to these performances is the undoubted synergy between actors and directors. Kennedy Bloomer and Toby Hampton have achieved consummate ease and natural sparkle from two actors at one with their on-stage personas. Whether it is heartfelt, verging on sentimental, or knockabout bravura, these are an ensemble at the top of their game.
Jew...ish is unmissable. This brief stop-off at the King’s Head Theatre must surely be the beginning of further outings. I need another visit, simply to catch some of the golden lines that were lost from an overdose of lols!
Cast
TJ         Edie Newman
Max     Saul Boyer