The Invisible Man - a ★★★★★ super-creative and multi-talented company! 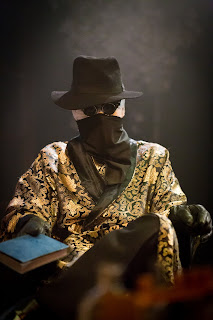 
Derek Webb’s adaptation of HG Wells’ timeless classic, The Invisible Man, is a gem. And by all accounts, south London’s premier fringe venue, The Jack Studio Theatre, once again has a virtually sold-out hit on its hands over the festive season. But check as there were a few returns as I arrived last night.
Shamelessly quoting the show synopsis, ‘a mysterious man arrives at the local inn of a sleepy Sussex village, wrapped in bandages and wearing a false nose. Beneath the bandages is Griffin, a scientist desperate to reverse the twisted experiment that has rendered him invisible.
‘This strange visitor soon sets the locals’ tongues wagging, and when a spate of baffling burglaries occurs, suspicions are aroused. Before long Griffin is on the run with a trail of villagers and police in pursuit, all desperate to do the impossible – to catch an invisible man.’ But enough, as this wonderful story is chock-full of fifteen characters – excluding the titular Invisible Man - all brilliantly realised by a super-creative and multi-talented company of three actors undoubtedly putting the force into tour de force!
Director Kate Bannister has clearly managed with incredible dexterity the intricacies of such a fulsome cast of characters. She seamlessly juggles the multiple entrances, exits, costume changes, accents and myriad of other details. Her indefatigable dynamic trio of Shaun Chambers, Matthew Parker and Scott Oswald achieve the virtually impossible in Karl Swinyard’s stylish set, without even breaking a sweat!
Parker’s performance is full of comedy in so many of his shrewdly-observed characterisations. Rely on it as he channels his best Stanley Baxter/Hilda Baker in landlady/hotelier Mrs Hall – camp with serious laugh-out-loud fun. Even funnier was Reverend Bunting gossiping over a peripatetic garden gate? It clearly amused me but the woman sitting behind me was hysterical with laughter! Chambers portrayal of various policemen was equally adroit and precise with some brief glimpses of musical theatre nuance. But his bandaged embodiment – I presume – of the Invisible Man was dextrous and nimble. Oswald had great physicality as he convincingly fought and had a credible extended and dialogue with an invisible Griffin – quite mesmerising!
I mention only a few of the characters but rest assured this is a master class in extended acting and characterisation. I think it was the great German architect, Mies van der Rohe, who once said, ‘God is in the detail’. Without doubt, that is the case with this adaptation of the Invisible Man which is a smart, tirelessly inventive telling of this enduring tale.