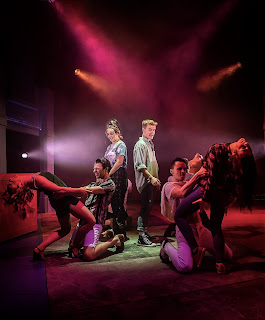 
Stiles and Drew's Soho Cinders is the epitome of a feel-good musical. And last night's new production at the Charing Cross theatre never felt so good! Originally premiered in 2011, musically and lyrically, it remains pertinent. But above all, the book by Elliot Davis, is hilarious. With what must be the definition of laugh-out-loud moments - witty, sharp, topical and packed full of clever one-liners, some dubious, but mostly spot on!
Loosely based on the story of Cinderella, Soho Cinders is a modern musical fable. Set in, and celebrating the London district of Soho, it mixes politics, sex scandals, and true love – all strangely relevant today!
With no real spoilers here, apart from it is entirely realistic to expect a happy ending. When impoverished student Robbie becomes romantically involved with engaged London Mayoral candidate, James Prince, his lap-dancing step-sisters, Clodagh and Dana, become the least of his problems! Robbie's best friend, Velcro, offers emotional and financial advice as she runs the family launderette, while James's fiancée, Marilyn Platt, deals with their unravelling relationship. Along the way we meet, the pushy, ambitious, master of spin and campaign manager, William George and conflicted, confused and dubiously moneyed, Lord Bellingham.
Director and producer, Will Keith's joyous new production fits beautifully into the reconfigured stage of the Charing Cross theatre. As an audience, you are now well and truly amidst the action on the byways and streets of Soho, cleverly recreated by Justin Williams.
It is not often that casting directors get a mention. Still, Harry Blumenau has achieved dream-team casting with Luke Bayer as Robbie and Millie O'Connell as Velcro - both decidedly young West End royalty. Bayer performs and sings with certain coolness and style. He elicits great empathy for his character. He is a pleasure to watch and also see develop both on the West End stage and in concert too. Millie O'Connell likewise is a delight to watch as a fearless and secure performer. We are lucky to have them together in the same show!
Undoubted scene stealers, Clodagh and Dana, Robbie's less attractive step-sisters, are played blazingly by Michaela Stern and Natalie Harman. Both have undoubted vim, vigour and enthusiasm as they throw themselves into some of the best musical numbers. In particular, I'm So Over Men, where they demonstrate a fantastically varied and demanding vocal range. They also have some of the best, if at times un-pc, one-liners in the show.
With standout performances from Lewis Asquith as James Prince and Ewan Gilles as his obnoxiously sexist campaign manager, William George, this is an ensemble entirely on top of their performances - all totally focused, with some excellent ensemble dance routines, choreographed by Adam Haigh.
I was confident that there would be a happy ending for Robbie. But even happier for Velcro when she found her uncredited dream man too - although he did look suspiciously like Luke Byrne!
Soho Cinders is a totally infectious musical - funny, real and a perfect snap-shot of so many aspects of our great city and politics. So, as we embark on a six-week general election campaign, let's hope people will vote with their feet and head down to Charing Cross. And, as with opening night, deliver a well-deserved standing ovation at the end!