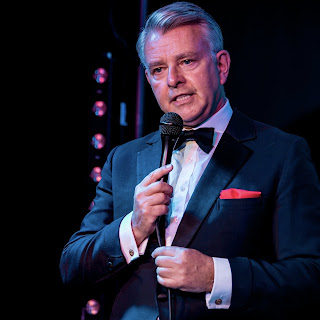 Richard Shelton's play, Sinatra: Raw is a sublime piece of Sinatra styling – gutsy, original, forthright, intimate but above all, magical. There are many old clichés about almost being in the room with a performer when you watch a so-called tribute act. Let's just say last night's performance by Shelton was as if Sinatra had genuinely returned. And even more joyously you were experiencing the quintessential Sinatra in an intimate venue and not in the Albert Hall, The Sands or even Madison Square Garden.

The show synopsis, 'invites you to Palm Springs, California, in 1971. Frank Sinatra faces retirement. The air is electric and the crowd jockey for position at Sinatra's last intimate show. His blue eyes are bloodshot and his face craggy with booze, cigarettes and memories. Things take an unexpected turn when he drinks One for My Baby too many. This is the 2am Sinatra you dream of meeting.'

Further epithets like dangerous, unpredictable and brilliant are also used and how apt they are. Shelton's 100-minute play is inspired by a Sinatra performance at the Purple Room, allegedly one of his favourite venues near to where he lived in Palm Springs. He talks with eloquence and passion about politics, race, love, family, career, movies and Ava Gardner. These are the stories that form part of Sinatra's history and are equally as legendary as the songs in his unrivalled songbook.

No Sinatra play would be complete without the musical narrative. And Shelton does not disappoint. I counted about twenty songs in the set, all teasingly written before 1971, thus rendering New York, New York inadmissible. Then enduring classics, all represented - Chicago, I Get A Kick Out of You, That's Life, Lady's a Tramp, ensuring no one would leave disappointed. Additionally, Shelton encouraged the clearly hyped audience to call out requests at the end, eliciting a couple of rarities like Girl From Ipanema and Witchcraft.

Shelton's musical interpretation of Ol' Blue Eye's material is pitch-perfect, all superbly supported by every Sinatra nuance and faultless mannerism – a real tour de force. Channeling Sinatra's long-time accompanist, Bill Miller is the musically impeccable, Michael Roulston. I suppose it would be churlish not to mention Sinatra's other long-term chaperone, Mr Jack Daniels, who was at his supportive best throughout!

Sinatra: Raw is one of those performances that leave an audience enervated, excited and enthralled, eliciting a spontaneous and heartfelt standing ovation for a massive portion of captivating theatre. Sinatra famously sings about Chicago being one helluva town but this is definitively one helluva show! Don't miss it; the real Mr Sinatra is not in town that often these days!