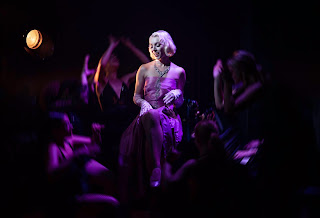 Anita Loos originally wrote the novel on which Gentlemen Prefer Blondes is based in 1925. So, as it approaches its 100th birthday, thankfully Sasha Regan's new production at The Union Theatre is full of madcap vim and youthful, life-affirming vigour. With the thinnest of plots, we are quickly on-board the obligatory trans-Atlantic liner en route to Paris with a beautiful array of crazy passengers. Gold diggers, rich dowagers with a penchant for champagne, assorted wealthy, seemingly stupid men, and smart blondes and brunettes in search of husbands – not to mention the Olympic running team!

But all this is really immaterial. The super-talented eighteen-strong ensemble exploits every nuance in the charmingly farcical script and rediscovers Jule Steyn and Leo Robin's score which is jam-packed with musical theatre gold. Bye, Bye Baby, I'm Just A Little Girl From Littlerock, Gentlemen Prefer Blondes and, of course, Diamonds are A Girl's Best Friend, to name a few.
Abigayle Honeywill takes on the iconic role of Lorelei Lee with great style and endless verve, ably assisted by Eleanor Lakin as Dorothy Shaw who sings and dances up a storm. This is a duo that makes a formidable musical pairing. Freddie King as Henry Spofford sings with superb presence and is the perfect foil to Virge Gilchrist as Mrs Spofford, Philadelphia's richest woman with a penchant for champagne. I must also mention Patrick Cook and Arran Bell as the hapless Lemanteur brothers, bumbling Clousseau-esque detectives – pure comedy, laugh-out-loud moments in their brief appearances.
Henry Brennan is once again at the musical helm and has achieved an excellent musical and sound balance, with some fine performances of this iconic score. Zak Nemorin's enthusiastic yet tight choreography drives the narrative with absolute joy. Whether it is Olympic runners, Lorelei's number I Love What I'm Doing with the four sailors or the many cabaret numbers.
Director/producer Sasha Regan has, without doubt, crafted a real gem of a show. And, while diamonds may be a girl's best friend, I am sure this gorgeous production will attract a myriad of new admirers - irrespective of hair colour!