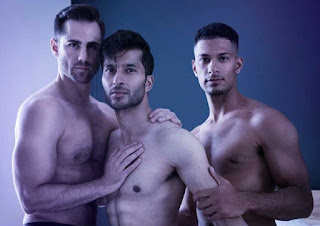 After a sell-out run at Southwark Playhouse earlier this year, S. Asher Gelman's play Afterglow has successfully transferred to the Waterloo East Theatre. There is clearly a healthy appetite for the work if the off-Broadway production is anything to go by. Scheduled only for a few weeks' run, it ended up playing for 467 performances and taking over $1million!
From the overwhelmingly positive reaction of last night's audience, it seems that Afterglow will provide light in the London sky after the sun has set for the foreseeable future too.
The old proverb maintains that two's company, but three's a crowd, often associated in a romantic context, especially as a way of asking a third person to leave. This would seem to be the perfect short-form synopsis of Afterglow.
With no spoilers here, ‘Josh and Alex, a married gay couple in an open relationship, invite Darius to share their bed one night. When a new intimate connection begins to form, all three men must come to terms with their individual definitions of love, loyalty and trust as futures are questioned, relationships are shaken, and commitments are challenged.'
Add to this decidedly sexy, sultry set-up, the fact that we also have two expectant fathers. And you have 80 minutes of emotion, passion, turmoil and confusion, all driven by the raw physicality of the trio and the notion of their insecure, even damaged, relationships.
Afterglow is a feast for the eyes. Not least because of the unabashed nudity but the strong, intense, poignant portrayals of the three main characters. Peter McPherson as Alex is exceptional as the tortured husband and gives a performance that is both captivating and irresistible. Adi Chugh as Josh portrays puppy-dog enthusiasm with confusing strength and undoubted vulnerability. Benjamin Aluwihare as Darius, the unassuming, even gauche, ultimate catalyst for the destruction of a seemingly secure marriage, is beautifully innocent in his enthusiasm and conveys a heart-felt naiveté in his ultimate confusion and pain. All are compulsive to watch and elicit conflicted emotions from an intent audience.
Steven Kunis directs with incredible pace and sharpness in a filmic-style that suits the clipped narrative and hectic action. All skilfully accommodated by Libby Todd's superb scenic design and Joel Price's soundscape.
S. Asher Gelman's has created a fascinating, taut piece of writing - captivating and undoubtedly enhanced by the dominant, yet heart-felt performances, of an ensemble entirely at one with themselves. Long may it, and they, play!
Afterglow
plays at London's Waterloo East Theatre,
Brad Street, Waterloo, London SE1 8TN
Tickets, click here https://waterlooeast.ticketsolve.com/shows/873607234
Adi Chugh Afterglow Benjamin Aluwihare Joel Price Kevin Wilson Libby Todd Peter McPherson S. Asher Gelman Steven Kunis The Review Chap Waterloo East Theatre