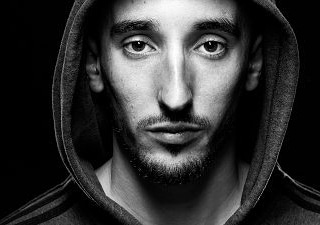 Written and performed with exquisite depth of character and heartfelt emotion by Ewens Abid, 'Belamour' is a new one-man show. It tells the story of a French builder who is desperately trying to find answers after the death of his mother and his own body being taken over by multiple sclerosis.
Based on a true story, Abid as Belamour and director Zois Pigadas, quickly break down the fourth wall and create a stable, appropriate rapport with the audience as the story unfolds. A simple, articulated mannequin is the only prop, which is cleverly used to punctuate and reinforce the high and low points of the story - joyous dancing, the beginnings of a relationship and ultimately the contortions of MS. We also learn about Belamour's mother and the deep, often times funny relationship, he has with her as a child and the evolution of that bond in later life.
Abid as Belamour gives an elegantly nuanced performance, fascinating to watch and captivating in the exploration of the family dynamic at various times of his life. It is insightful, moving, heartfelt and, above all, credible with some moments of great humour too.
Zois Pigadas directs with succinct meticulousness and exploits Abid's undoubted ability in his physical performance, whether that is in the moments of comedy or the representation of the adverse effects of MS.
Belamour is an intelligent, taut piece of writing, enhanced by the clout and muscularity of the performance. Without doubt, original, captivating and beguiling, even when dealing with the realities of MS.
This is one not be missed!
Nominated for an OffFest award
Belamour plays at The Etcetera Theatre as part of The Camden Fringe
Fundraising in aid of the Multiple Sclerosis Society