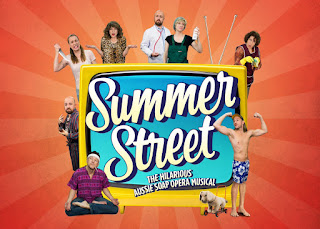 
One of the great things about Summer Street is that it has the best strapline – The Hilarious Aussie Soap Opera Musical! What’s to misunderstand as clearly ‘it does exactly what it says on the tin!’ But enough with straplines!


Summer Street – The Hilarious Aussie Soap Opera Musical - is the brainchild of writer, director, and producer Andrew Norris who had the inspiration for the musical way back in 2004 and some fifteen years later, clearly this labour of love has arrived at London’s Waterloo East Theatre, fresh from a brief sojourn at the Brighton Fringe.


With the 30th anniversaries of Neighbours and Home and Away happening last year ‘Summer Street provides the perfect opportunity to recapture the glory days of Kylie and Jason and relive the joy of tuning in every week to watch the captivating tales from Down Under, as four Aussie soap stars try to resurrect their careers. There are hilarious and unexpected consequences – and, of course, plenty of songs to tap your foot to.’


So what’s not to like? Well to be quite honest, not a lot! Summer Street is a complete tour de force of camp nonsense, cleverly delivered by a tremendous group of honorary Aussies, who can sing, dance, act and have a wicked sense of humour and a joyous twinkle in their eyes. This is one of those occasions when, as an audience member, it is incumbent on you to sit back, embrace the absurd and simply enjoy the craziness as it seamlessly unfolds around you.


Julie Clare is the brilliantly bossy mastermind of the plot – no spoilers here – and leads the tight, multi-talented ensemble and is brilliantly supported by Simon Snashall, Myke Cotton and Sarah-Louise Young. Andrew Norris has crafted the best pastiche songs, and I am still humming Lucky Plucky Me which must be the perfect amalgam of every Kylie, Jason and Stock, Aitken, Waterman hit put together! But nevertheless seriously infectious good fun!