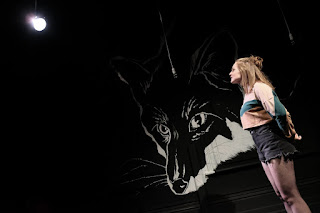 
Tom Powell’s Little Echoes, currently playing at the Hope Theatre, is a tightly observed portrayal of a disparate group of people all with their own problems and issues that seemingly have no connection with each other.


The synopsis from the Hope website explains, ‘Shajenthran’s brother has had acid thrown in his face, and Shaj is out for revenge. Danielle’s teenage crush on a pop idol develops into an illicit relationship, ‘professional mentoring’ becoming something much darker. June has spent over a decade serving the private needs of the super wealthy, but her new assignments confront her with the questions she’s spent a lifetime running from.’


Little vignettes are drawn from each of the characters, Shaj, Danielle and June, slowly give an insight into their particular life and issues without seemingly any real linkage. Clearly, there is ultimately a clash of their stories, at which point they become sadly entwined and intrinsically linked - no further spoilers here.


Director Stephen Bailey, superbly aided by composer David Denyer, designer Jessica Staton and lighting designer Chris McDonnell have created a worrying environment in which there is some genuinely superb acting, which kept you engaged, albeit at times frustrated by the speed of plot exposition, from start to finish.


Maisie Preston as Danielle is a quick-thinking teenager who takes life at face value, superbly naive and wide-eyed until her world spectacularly falls apart into a murky land of intimidation, mistrust, shameless abuse and exploitation. Her performance is captivating, charismatic and real, yet at the same time gut-wrenching as the darkness ultimately descends. Mikhael DeVille as Shaj conveys his despair at his brother’s predicament with a beautiful sense of panicked powerlessness and encapsulates the thoughts and action of a human being in despair and enforced vulnerability. Ciara Pouncett as June is wickedly cold, antagonistic and difficult to fathom in terms of her motivation but her performance is ultimately the most enigmatically disturbing and worrying.


Little Echoes is not an easy watch, but it is, without doubt, a strongly conceived and executed exposition of mistrust, abuse and intimidation - theatrical sophistication and performances like this don’t come along every day.


Photography by Will Alder