Tom Hartwell has variously been described as, ‘the writer for the millennial generation’, ‘the one to watch’ and ‘one of our finest emerging playwrights’. All giddy stuff but he has, without doubt, maintained a great momentum since his debut play, You Tweet My Face Space in 2015, followed in 2017 by Contactless and Flood.


I saw Before 30 last year, and now it has landed at the award-winning Waterloo East theatre. As I said then in my review summary, it is ‘a brilliant piece of funny, incisive writing coupled with a tour de force performance’.


Hartwell has expertly written himself a one-man show, the story of, ‘Chris, an aspiring chef - making ends meet between job applications by delivering food to people who can’t be bothered to cook. His past struggles with depression and anxiety resurface when faced with the prospect of facing thirty, constantly comparing himself to his accomplished grandfather, who seemingly achieved everything so easily’.


Once again, as with You Tweet, Hartwell has his finger on the social media pulse of a generation. Cleverly observed commentary on the problems of home ownership, parents, Deliveroo and the perennial angst of growing older – is 30 old? The humour of his writing is rapier-sharp, but the punch lines always strike home and make a serious point. While it is funny to see him emerge from a tent ostensibly pitched in a rented garage at the beginning of the piece, he then goes onto exploring the problems of property ownership. Likewise, he gives a brilliant exposé of the trials and relentless tribulations of the gig economy – food or drug delivery? One could even imagine Hartwell on his Deliveroo bike, all in the line of conscientious research of course! 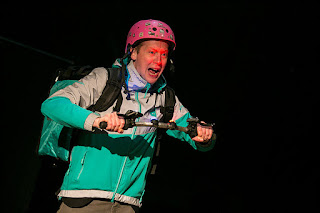 While Before 30 is very funny, Hartwell also explores the mental health issues thrust upon a generation by the seeming hopelessness of security and the lack of a ‘traditional’ family unit and structure. It also reinforces his position as a writer of considerable talent who has an eye for a visual and physical gag but above all an inherent, emotionally shrewd and mature understanding of the society about which he writes.


Director Phil Croft also reinforces Hartwell’s writing with a dextrous touch, cleverly exploiting his undoubted physicality as an actor together with the ability to take the audience from laugh-out-loud scenarios to the biting pathos of life in doubt or even despair.


I hope that Before 30 doesn’t disappear into the ether after this brief stopover at Waterloo as it deserves to be seen by a much broader audience – in fact, all of Hartwell's work needs to be seen more widely. But in the meantime, simply head down to Brad Street, Waterloo East!

★★★★★  Rock of Ages Kevin Clifton gave an impassioned closing speech at the opening night of Rock of Ages where his message was simple – don’t stop believing, theatre is back with a bang after a tawdry eighteen months, and safe in the hands of this decidedly boisterous, upfront and joyous production! Directed and choreographed by the always-superb Nick Winston, Rock of Ages is loud, camp, outrageous, fun and a lot more beside. It features knockout performances from a truly superlative ensemble and, if last night was anything to go by, on top form! Featuring a songbook of over twenty rock classics/bangers, the heart and soul of this show is pulsating even as you take your seats. There is a pent up anticipation in the audience palpably fit to bust! The fourth wall is quickly smashed as Joe Gash (Lonny) plays a rock emcee with vivacity, cheeky charm, jazz hands and underlying danger as he encourage the audience to say hello to the person next to them – panto comes early to Wimbledo

☆★★★★ Eigengrau The meaning of the word Eigengrau in the title of Penelope Skinner's play is the colour seen by the eye in perfect darkness. This has some relevance but is not crucial information as the story begins to unfold. Quoting the brief synopsis, ‘this is a play about London. About being lost in urban chaos. About a struggle to find meaning in a world of random encounters and connections'. Featuring four quintessential millennials – feminist activist researching and writing about rape, unemployed dipsy aspiring karaoke singer, overweight fast-food server dealing with personal grief and a one-dimensional, but well-paid, marketing man. And all of whom become intrinsically linked. Skinner writes with high pace and covers many scenarios that create a multi-dimensional dynamic between the four characters. On a day-to-day level, their desperation for a relationship, the mundane yet eternal problem of money, and simply paying the rent, inherent mental health issues and th