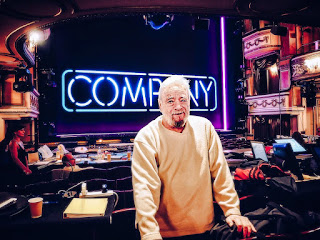 
Stephen Sondheim and George Furth's legendary musical comedy Company is about life, love and marriage, which seemed to have particular resonance for the couple sitting in front of me as they nudged and smiled at each other throughout the show. Clearly, Marianne Elliott's updated version of this 1970’s musical comedy was spot on and fiercely relevant to today’s audience.


Originally the plot revolved around Bobby (a single man unable to commit fully to a steady relationship, let alone marriage), the five married couples who are his best friends, and his three girlfriends. With a simple, clever tweak, Bobbie is now a woman, and with other minor appropriate gender changes, the story is even more germane and pertinent to today’s society. As the publicity for the show explains, this is ‘the legendary Broadway musical as you've never seen it before’. 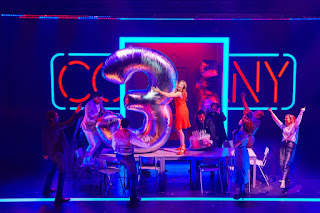 Unlike most book musicals, which follow a clearly delineated plot, Company is a concept musical composed of short vignettes staged on Bunny Christie’s stunningly-stylish, ever-evolving set, presented in no particular chronological order and all linked by Bobbie's 35th birthday celebration.

Stepping into Bobbie’s heels is the sublime Rosalie Craig who is the complete embodiment of this new-found leading lady – stylish, cool, witty, assured, vulnerable, and relaxed - who adds enormous depth and pertinence to Stephen Sondheim’s joyous score and George Furth’s sharply-observed book. Her rendition of Being Alive is the stuff of West End legend!


Talking of legends, the Company company is blessed with Broadway royalty in the form of Patti LuPone. Completely inhabiting the iconic role of Joanne, Miss LuPone has some of the funniest and most wicked one-liners ever written as her hors-d'oeuvres and for her main course and dessert, obligatory Vodka stinger in hand, The Ladies Who Lunch. What more could you ask for? This is a performance of depth, experience and bravura, the like of which does not come along very often and should not be missed at any cost!


It is also imperative to make lavishly clear that the Company ensemble is utterly exemplary and all add to the perfection of Marianne Elliott’s vision. Jonathan Bailey as new character Jamie is a total revelation and his rendition of Getting Married Today is a flawless show-stealer and must be seen, and heard, to be believed! Richard Fleeshman as Andy is charmingly adorable, albeit rather stupid, but gets two of the iconic songs in Barcelona and You Could Drive a Person Crazy. Mel Giedroyc and Gavin Spokes as Sarah and Harry, a couple of secret drinkers and eaters, were the embodiment of so many couples that we all know and love. And this is where the couple in front seemed to enjoy the most empathy!


Director and producer, Marianne Elliott has crafted a musical masterpiece, clearly capitalising on a brilliantly talented ensemble and creative team, whose love and respect for Sondheim and Furth’s Company shines incandescently on stage at the Gielgud Theatre and is, without doubt, a quintessential pleasure!
Company Sitzprobe