The Moderate Soprano - A quintessential joy 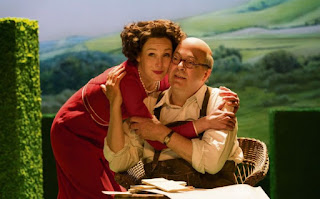 
As I was going down to the stalls to see The Moderate Soprano. I heard an American ask, ‘what’s it about and will I understand?’ The answer was, ‘it’s quintessentially English and, yes, of course.’ I must admit that I'm not a fan of opera and had always been assured that if you like musicals, you will grow into opera. Sadly that’s a babygrow I’ve never grown into! However I did go to Glyndebourne once and saw Strauss’s Ariadne auf Naxos, but enough of my vaguest recollections – apart from the picnic on the lawn!


From the start, I must say that Jeremy Herrin's production of The Moderate Soprano is the most beautiful, sensitive and elegant creation. The design by Bob Crowley encapsulates pure style in its sheer simplicity and sets the stage for the most beautiful performances from Roger Allam as John Christie and Nancy Carroll, as his wife and the moderate soprano. 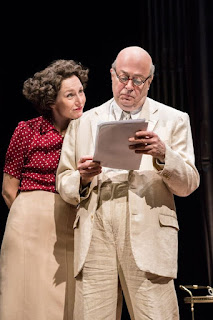 David Hare’s play is the story of a love affair between John Christie and Audrey Mildmay, the search for artistic excellence in the face of searing scrutiny, sacrifice and the impending Second World War, and a group of refugees for whom life in Nazi Germany had become impossible. Above all, it’s Christie’s obsession with building an opera house in the grounds of his home in Glyndebourne in Sussex.


Roger Allam completely inhabits the Christie character, both emotionally and mentally but physically with his transformative fat-suit and bald wig. His love of Audrey Mildmay is palpable. Nancy Carroll is equally as strong, and the interaction between the two is a wondrous piece of acting. Anthony Calf as Carl Ebert, Jacob Fortune-Lloyd as Rudolf Bing and Paul Jesson as Fritz Busch complete this incredible ensemble and are the perfect foils for Christie’s cantankerous, almost obsessive, single-mindedness in achieving his opera house dream.


Christie wanted Wagner, but they gave him Mozart. I wanted a good night at the theatre, but they gave me perfection - what more can anyone ask?
The Moderate Soprano runs at the Duke of York's Theatre until 30 June 2018 - Be quick!