Lucky Stiff, based on the book The Man Who Broke the Bank at Monte Carlo by Michael Butterworth, is billed as a musical comedy and it certainly lives up to this description. A great ensemble of eleven, plus the best corpse in fringe theatre, not only sing and dance brilliantly but also are incredibly funny too. 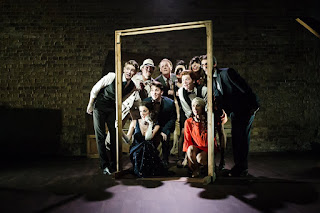 Rather than reinvent the wheel, here’s the show’s synopsis from the Union Theatre’s website, ‘shoe salesman Harry Witherspoon is stuck in a rut until, one day, he discovers he is to inherit his uncle's fortune; but, there is a catch. To claim the inheritance Harry has to take his uncle's body around the French Rivera for one last adventure! Chasing him for the same fortune are a dog lover from Brooklyn, a short-sighted Mafia Boss' wife, and an optometrist. Add to that a host of other zany characters and you've got the recipe for a madcap evening’. So from this, it’s not difficult to see the potential for some light-hearted fun and games -Lucky Stiff does not disappoint.


Leading the cast as the hapless Harry Witherspoon is Tom Elliot Reade, who goes from confused shoe salesman from England to even more confused beneficiary, frantically gallivanting around the Riviera’s best hotels, casinos and restaurants in an effort to satisfy the conditions of his late uncle’s will. All is not as it would seem and it’s not long before he encounters Rita La Porter, an eccentric myopic, played exquisitely by Natalie Moore-Williams and her optometrist brother Vincent Di Ruzzio (Tom Keeling). 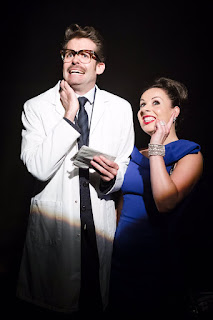 Without a doubt, Lucky Stiff relies on the tightness of the entire ensemble to make the piece work and all deserve praise. Suffice to say, this is a show that is the sum of all its parts – and this talented group play them all with equal gusto! Director Paul Callen manages the intricacies of the farcical plot with great aplomb, and it’s not long before you’re carried along with the ongoing crazy capers! Jamie Neale's clever choreography adds to the fun and there were elements that seriously made me laugh out loud! 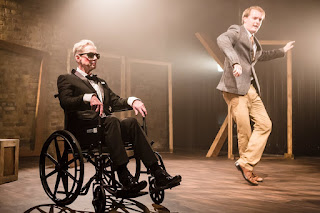 This is a thoroughly enjoyable fun-filled farce and definitely worth a visit to the charming Union Theatre.  Just suspend belief, relax and enjoy, especially Ian McCurrach’s peripatetic performance as Tony Hendon!