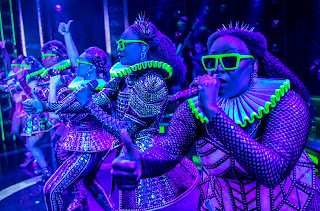 SIX is a musical designed for the generation who grew up with Horrible Histories on the telly, managing to be both informative and incredibly entertaining, combining the energy of a pop concert with a piece of history you’ve probably at least heard some of, even if you were asleep in your History classes at school! There are some jokes and references in there for those watching who are a little more familiar with the period or the queens themselves, but generally you do not need much, if any, knowledge of the history going in.

The Vaudeville’s stage is decked out with a gorgeous Tudor-inspired backdrop, which is creatively lit during the show. The lighting, combined with the choreography, manages to keep the space from ever feeling cramped – a difficult thing given how many people are moving at once. The costumes, too, deserve a shout-out – Gabriella Slade’s way of combining modern colours and shapes with period accents is magnificent, and I have to hand it to her for one particular costume reveal – which I won’t share detail of – you’ll have to go and see for yourself!

It was also wonderful to see such a diverse cast, in terms of race, gender and body type. With a show where it would be so easy to typecast or limit who gets to play these queens, it’s beautiful to see that Marlow and Moss have refused to do that.

The performances were the biggest highlight of the show by far. While I did come home with an Anna of Cleves pin, I would be hard-pressed to find a favourite performance amongst the roster. These are not easy songs to perform by any means, and with multiple official recordings out, each queen also has the challenge of making the song their own. They all managed this brilliantly – having heard multiple renditions of each song myself before going to see it live, I was blown away by each and every song in here, and it felt like I was hearing them all for the first time. The other thing that was refreshing to see was how genuine the queens felt – they were allowed to be sexy at times, but never felt sexualised by the narrative or music itself, and each queen came across, in their own way, as a real, whole person. My only complaint is that I wish we could have had a little more time with each queen outside of their songs – the dialogue is kept to a minimum, just enough to move from one song to the next, and while I can see why Marlow and Moss did this, I do wish they’d given us just a little bit more.

The show moves at a breakneck pace, and it manages to keep up an impressive level of energy throughout. While much of it is fun, even silly at times, there are a few moments of real vulnerability and sincerity, when it feels like everything stops for a second. Jane Seymour’s song, Heart of Stone, is the biggest example – I was too busy looking at the stage (and crying myself, frankly) to check, but I’d be willing to bet there wasn’t a dry eye in the house once Claudia Kariuki had finished singing.

SIX deserves every star I could give it, and probably more too! I left immediately wanting to go back inside and watch it all over again (and again, and again, and again). May these queens’ reign over London be long and happy, and may I have the privilege to get to visit them again one day!

The 2023 wives of Henry VIII in the hit West End musical, SIX, are Rhianne-Louise McCaulsky as Catherine of Aragon, Baylie Carson as Anne Boleyn, Claudia Kariuki as Jane Seymour, Dionne Ward-Anderson as Anna of Cleves, Koko Basigara as Katherine Howard and Roxanne Couch as Catherine Parr.

SIX is currently booking at the Vaudeville Theatre until Sunday 29 October 2023.