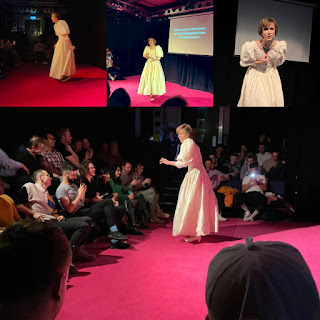 Diana: the Untold and Untrue Story

I looked up the meaning of brilliant in the dictionary recently and it simply said, ‘see Linus Karp in Diana Untold at The Pleasance.’ As a reviewer need I say more? Yet there are many more superlatives that also cover this zany, madcap, original, clever, funny, sharp, hysterical, breathtakingly inventive piece of creativity from the miraculous mind of writer, producer, director and indisputably, star of the show, Linus Karp.

With recent reports saying that Netflix had over 1.1million views this week for Series Five of The Crown, it is equally exciting that the originality and undoubted pizzazz inherent in Karp’s Diana: the Untold and Untrue Story is also garnering well-deserved, sold-out performances – you have been warned!

Shamelessly quoting the show’s excellent blurb, ‘Diana is a queer, comedic reimagining of the people's princess combining theatre, drag, puppetry, multimedia, original music, dance and a lot of queer joy.’ And by the reaction of the audience it was refreshing and contagiously uplifting to hear such heartfelt and spontaneous laughter.

Karp tells the well-worn story of Princess Diana in a series of frenzied tableaux, highlighting vividly the high and low points of an extraordinary life. Whilst ostensibly a one-woman show, he is accompanied by his trusted Powerpoint presentation but with huge supporting performances from Gerri Allen as the Queen, Zina Badeam as God and co-director and stage-manager extraordinaire, Joseph Martin as Prince Charles and a rollicking-good rampant performance as Camilla. Further, Karp has once again exploited his penchant for audience participation with some knock-out, pertinent and, at times, panic-stricken embodiments, especially the superb performances of Diana’s parents!

But without doubt, this is yet another phenomenal creation from the outrageously special force of nature that is Linus Karp!

Diana: the Untold and Untrue Story plays at the Pleasance Theatre in London until 26 November 2022 and touring nationwide thereafter, details at linktr.ee/untruediana