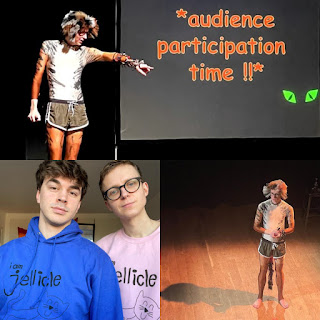 How To Live a Jellicle Life: life lessons from the 2019 hit movie musical ‘cats’

I was watching Sir Cameron Mackintosh talking recently about his 50 years in show business and the need to reinvent hit productions after 25 years viz. Phantom, Miss Saigon and Les Miz. Maybe rather cynically I considered this a budgetary/production overhaul to fit into smaller theatres and increase profitability, rather than any real artistic reinvention? But hey, maybe I’m being unfair but it did make me ponder Linus Karp’s How to Live a Jellicle Life... a wondrous production inspired, motivated and ultimately a glorious homage to Cats - the 2019 hit movie musical!

This is the point when I would encourage Sir Cameron to get down to the Two Brewers in Clapham tomorrow and take in the last night of Karp’s infectious, smart and totally compulsive homage to Cats. This is surely the quintessential piece of reinvention!

Having immersed myself in Linus Karp’s Jellicle world for a full hour, it is easy to appreciate that he is, without a doubt, a totally unique force of nature. And totally welcome and a huge bravo for that alone!

Karp draws inspiration for his almost obsessional comedy from every character from Cats – Rebel Wilson, Ian McKellern, Jason Derulo, Ray Winston, but with special credence given to the performance of Tayor Swift, a slightly undefined, albeit justified, assault on the bona fides of James Corden, but all nevertheless surpassed by the overwhelming adulation, nay love, for the dame that is Judi Dench!

Linus Karp and producer Joseph Martin have been on tour for the last three months and conclude their epic, 22-venue marathon at London’s Two Brewers in Clapham on Friday. This is a gem of a show, original, heartfelt, irresistibly joyous and Linus Karp is unmissable. I have a feeling this will not be the end of Jellicles, but look forward to seeing what is next from this furtive and ingenious mind!

How to Live a Jellicle Life is currently streaming. To link linktr.ee/jellicle