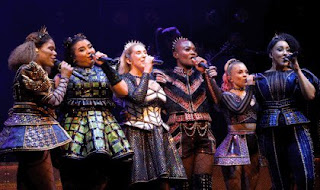 The rule of SIX arrived recently at the Vaudeville Theatre, its new West End home, with swagger, sass and bravura aplenty. And if the word of the great Nica Burns, theatre owner extraordinaire, is to be believed, this is SIX’s forever home and its peripatetic London wanderings are over - all hail the Queen!

Having first seen SIX over three years ago, I recall the atmosphere as you entered the Arts Theatre was electric and the excitement in the air was palpable. There was a wonderful feeling of anticipation and an audience clearly determined to have a glorious time. And boy, none of that has disappeared at the Vaudeville but is reinforced as the unstoppable power of this wondrous global hit becomes ever potent. Such is the power of this show, I felt that the entire audience would have willingly turned around and watched the 75-minute show over again given half a chance!

SIX is based on the life stories of Henry VIII’s six wives and quoting from the original blurb, ‘from Tudor queens to pop princesses, the six wives of Henry VIII finally take the mic to tell their tale, remixing five hundred years of her-storical heartbreak into a celebration of sisterly sass-itude’.  This is, by no means, a dry resumé of dusty history but a celebration of feisty women at their sassiest best, with or without their heads!

This home-grown ‘histo-remixed’ pop-concert musical by the enormously gifted, witty, innovative and mega-talented Toby Marlow and Lucy Moss returns to London after the ravages of Covid and three previous homes. After a tremendous run at the Edinburgh Festival 2017 and a short residency at the Arts theatre, we were warned it would only be in London for a few weeks! You didn’t need a crystal ball to know it would be back and a more permanent home would be found as it had cult classic written all over it in copper plate and undoubtedly using a quill pen - how time has proved us right!

The actual history lesson contained within the show, tells the story of Henry’s six wives in turn – Aragon, Boleyn, Seymour, Cleves, Howard and Parr. It is in effect a sing-off to establish who had the worst time as his wife – two headless wives, I would have thought won hands, or should that be, heads down?

The wives played by Jarneia Richard-Noel, Courtney Bowman, Natalie Paris, Alexia McIntosh, Sophie Isaacs and Danielle Steers, once again totally rip up the stage with their undiluted enthusiasm, outrageously fabulous singing and dancing, and entirely infectious performances. I’m totally breathless, and all I’m doing is writing about it!

Toby Marlow and Lucy Moss’ inventive score draws ‘Queenspiration’ from pop music royalty including Beyoncé, Britney Spears, Adele, Rihanna, Alicia Keys,  Arianna Grande and many more, and is an absolute contagious joy and guaranteed to lift the most jaded of souls.

Everything about SIX hits the highest notes, with intelligent and sparkling direction by Lucy Moss and Jamie Armitage, tight, sensuous choreography by Carrie-Anne Ingrouille and a knock-out all-girl band who take the score and production to another level. Special mention must also go to Emma Bailey for the set, Gabriella Slade for the mega-glittery costumes, Paul Gatehouse for the knockout sound and Tim Heiling for the ever-inventive, hypnotically dazzling lighting.

SIX is most definitely a ten; however, in the theatrical world of stars, it must be a five. Seemingly that is now history too, as six stars are here by royal command. And who would dare argue with these fabulous Queens as they begin their long-to-reign-over-us stay at the London’s Vaudeville – other theatres are available nationwide and internationally on request!