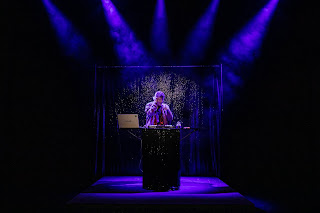 As the great Kylie Minogue is seemingly the conservator of all things disco, so Georgie Bailey’s new play, DJ Bazzers Year 6 Disco, currently playing at Hammersmith’s Riverside Studios, records the aspirations, hopes, fears and torment of Barry, resident DJ and caretaker at Brigdale Primary school. And, once again, Bailey’s writing continues to fascinate, absorb and captivate to such an extent that you can’t get it out of your head as the nuance and depth of thought permeates ever-menacingly deeper.

Shamelessly quoting Chewboy’s blurb, ‘Tonight is the Year 6 Leaver’s Disco, the biggest gig of the year. With a mighty set list of early-noughties bangers cued, Baz is ready for the event of a lifetime, That is , until an unlikely old face forces him to recollect the things he’d kept buried for years, and face up to the things in his past which will define his future...’

Chewboy Productions of Bazzer is beautifully crafted at so many levels. Mike Cottrell’s direction is relentless, exploiting every aspect of Baz’s life through his age-defined obsession with disco. He also smashes the fourth wall, engaging the audience with sing-a-longs, game playing and even play reading, all beautifully contrived and set up by Bailey’s wonderfully detail-obsessed mind games.

And as to Mr Sunderland, boy does he give a tour de force performance with balls –  glittery disco balls that is! This is a piece of precision, pace and power. His razor-sharp interpretation of Bailey’s multileveled interpretation of joy and despair is sublime and unmissable. Without a doubt, that hackneyed phrase ‘one to watch’ comes to mind, but with Sunderland, make sure your binoculars are at the ready too!

My final exhortation for DJ Bazzer’s Year 6 Disco is simply act your age and, as a child of Studio 54, get down to Bazzer’s while you can. This is one great night at the disco and as Queen Kylie herself might say, You Should Be So Lucky!