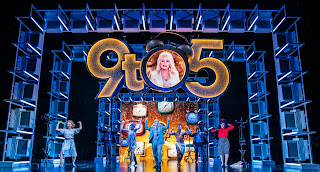 Musical theatre is back with a vengeance at the New Wimbledon Theatre and I defy you not to welcome with outstretched arms Dolly Parton’s slick and stylish production of 9to5. Based on the now 40-year-old film of the same name, this production is the quintessential definition of feel-good and proves that the business known as show is decidedly back with one enormous bang!

Breathlessly described by the show’s PRs as ‘the most fun you’ll have at the theatre all year’, I am struggling to disagree. 9to5 is a joyous, uplifting night at the theatre and, without a doubt, this is a company, lead by Louise Rednapp, that’s on top top form.

Shamelessly quoting the production blurb, ‘9to5 the Musical tells the story of three workmates pushed to boiling point by their sexist and egotistical boss. Concocting a plan to kidnap and turn the tables on their despicable supervisor, will the ladies manage to reform their office - or will events unravel when the CEO pays an unexpected visit?’

Sean Needham plays Franklin Hart Jr with endless brash bravura, is a joy to watch and doesn’t  miss a trick as he easily  and convincingly interacts with a our three leading ladies – Louise Rednapp as Violet Newstead, Vivian Panka as Judy Bernly and Stephanie Chandos as Doralee Rhodes - and the super-talented ensemble as a whole. Parton constructs some huge, stand-out showstopping numbers for each of our leads to shine. Panka grabs Get Out and Stay Out and constructs a heartfelt and moving lament, while Rednapp takes her Broadway ensemble number, One of the Boys, and imbues it with razzle dazzle and sparkling pizzaaz. Special mention must also go to Julia J Nagle as Roz Keith who gave a master class in camp in her stunning ensemble rendition of Heart to Hart.

Directed with pace, verve and panache by Jeff Calhoun, 9to5’s ultimate strength and joy is the undoubted vigour and commitment of the magnificent ensemble.

Don’t hesitate, get down to Wimbledon as soon as possible for a seriously fun night out and be grateful that Dolly Parton's 9to5 tour continues countrywide well into 2022!