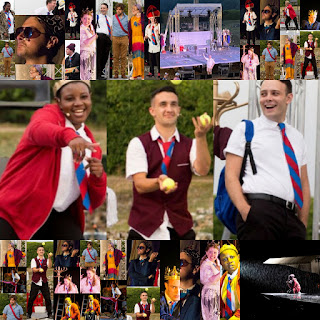 Being back in the theatre after a Covid-enforced absence of six months felt like Dolly Levi returning to the Harmonia Garden. So to be in St. Albans’ Open Air Theatre on a sunny Sunday afternoon for one of the last performances of the summer season was very special. And Matthew Parker’s new production of Henry V didn’t disappoint and was, simply put, breathtakingly brilliant! Parker not only directs with his normal vigour, forensic attention to detail and inventiveness but, in addition, has also ingeniously adapted Shakespeare for planet Covid and provided choreography that would guarantee a spot on Strictly!

Ingeniously reimagined as an outdoor summer production, a group of enthusiastic drama students and their teachers come together to bring this rousing, poignant and often funny play to life with ingenuity, enthusiasm and wit – and all cleverly woven around safe social distancing requirements!

For those requiring a synopsis of Henry V, I shamelessly quote the blurb. ‘Henry IV is dead and the young Prince Hal is King. With England in a state of unrest, he must leave his rebellious youth behind and prove himself a worthy ruler. The young king becomes feted warrior as a tiny kingdom rouses its spirits to stake a claim on the towering throne of France.’

From restrained beginning to rip-roaring finale, this 90-minute tour de force production was an ensemble on top form - LUKE ADAMSON,  MARA ALLEN,  EDWARD ELGOOD, RACHEL FENWICK,  PAULA GILMOUR,  CASSANDRA HODGES,  JAMES KENINGALE,  FELIPE PACHECO,  JACK REITMAN, MELISSA SHIRLEY-ROSE -  with performances bursting with energy, originality and laugh-out-loud moments galore – pure infectious joy! I know that if it had been around when we were studying the play, A-stars would have been the order of the day!

It is unfair to highlight any one performance as they were all tremendous – but I will! Luke Adamson’s joyously camp and wondrously versatile performance; Cassandra Hodges brought Covid awareness to a whole new dimension, Paula Gilmour made me thankful for my French A-level and Mara Allen’s Henry was relentlessly absorbing throughout, especially her rallying cry from the ramparts of this superb historic setting. A special mention must go to Felipe Pacheco whose performance was mesmerising the whole time with great physicality, energy and a well-deserved credit for additional finale choreography to boot. I never knew flossing was such an art form!

Matthew Parker’s production of Henry V was a welcome, albeit unexpected, return to live theatre. And once again Parker has put together an ensemble that worked seamlessly and with a contagious enjoyment that reminded us of what we are missing without live theatre in our lives. Regrettably, my review appears after the show has closed but the biggest bravo goes to this entire, superb company.  And I would venture to suggest there is undoubtedly a place for this production for many years to come - maybe St Albans for a well-deserved summer reprise in 2021!