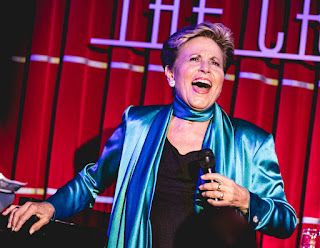 
I reviewed Lorna Dallas in cabaret at the Crazy Coqs with her show, Stages, last year – link here. This was in effect the follow-up to Home Again, her return to show business after a 20-year hiatus. I wasn’t lucky enough to see a live performance of this show in July 2017 but was delighted when the Stay at Home with Crazy Coqs series on YouTube announced it was to be featured.
Checking the definition of doyenne - the most respected or prominent woman in a particular field – I decided Lorna Dallas should be simply added in so many categories. A sublime cabaret performer, with immaculate musical style and, as I’ve said before, always gives the ultimate master-class in the genre. I could go on!
Home Again features an eclectic and historically diverse songbook ranging from Sondheim, Lloyd-Webber and Herman to Ivor Novello, Jerome Kern and Rodgers & Hammerstein. Dallas weaves an engrossing narrative throughout the evening with the overriding theme of love, especially for her husband, cleverly punctuated with well-known songs and some more obscure offerings too. And all beautifully showcasing her exquisite soprano voice. She also has a superfluity of amusing showbiz stories ranging from her experiences in Las Vegas seeing Sinatra, working with Cleo Laine in Showboat and more surprising playing Miss Malloy to Danny La Rue’s Dolly Levi in Hello, Dolly! That must surely have been fun?
Smartly introducing the set with As If We Never Said Goodbye from Sunset Boulevard was a clever autobiographical comment, followed by other classics such as Younger Than Springtime, Before The Parade Passes By, Nobody Else But Me – minus dance break – and her first-time duet with Joseph Carr, her musical director of 29 years. And what better song for a confessed Follies addict but You’re Gonna Love Tomorrow, accompanied here with a sneaky request for I’m Still Here in a future show?
Lorna Dallas is a joy to watch, a consummate and inspirational professional with her craft comfortably at her fingertips. She remains a must-see performer, so if you missed her master-class shows last time at Crazy Coqs, this recording will have to suffice until the real thing comes along. Hopefully in the not too distant future!


'LORNA DALLAS: HOME AGAIN'
- the full show is being streamed FREE on the Crazy Coqs YouTube channel
https://www.youtube.com/watch?v=7a96_w3jOSU
Stay at Home with Crazy Coqs is a free, online series bringing you new videos every day from leading artists across music, cabaret, comedy and more. Like what you see? Show your support for artists across the industry and donate now: https://www.justgiving.com/cc-stay-at...
Barry Kleinbort Brasserie Zedel Crazy Coqs Home Again Joseph Carr Kevin Wilson Lorna Dallas Stay at Home with Crazy Coqs