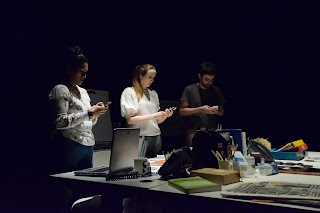 Tell It Slant
This may be slightly off-the-wall but I must mention Frank David for his wonderfully immersive sound design for Tell It Slant. As I walked to the tube, my phone rang, and without hesitation, I answered, ‘hello, press office!’
Writer Maev MacCoille, clearly a seasoned communications professional at some point in her career, has crafted a fast-paced master class in crisis PR, where ringing phones are indispensable props. And this is achieved in choreographed spades!
Shamelessly quoting the PR blurb for the play – surely any PR’s dream, Tell It Slant tells the story of ‘Dara and Vick who have history. Dara is the veteran press officer, Vick the rookie struggling through an uncomfortable first day. They thought the most complicated thing they would be facing was their own feelings and a tricky news story about cats, but a sudden crisis changes everything’.
Avoiding any spoilers, this is a serious crisis in a government press office with all the incumbent bureaucracy. Journalists baying for Boris to visit the floods almost seem mundane when they are thrown into a life and death incident without any real detail and, more importantly, answers.
At my performance, playing Dara and Vick were Joshua Jewkes and Cliodhna McCorley respectively, supported by Alia Sohail as Sam, the third character at the coal face of PR. This was an on-pointe ensemble that achieved sharp realism throughout. Joshua Jewkes encapsulated the dog-eared and fatigued frustration of his seemingly exciting job - but in reality, simply mundane monotony. Cliodhna as McCorley, poacher turned gamekeeper, journo turned PR, captured the modified point of view totally convincingly, giving a performance full of compelling nuance and credible distinction. Alia Sohail was every press office’s quintessential junior account exec, consistently upbeat amidst all adversity – a clever, well-observed insight.
Director Erica Miller manages the sheer pace of this 75-minute piece with assured skill. I am unsure of the black-comedy handle because even crisis does tend to have a few more laugh-out-loud moments, usually followed with a half-hearted apology for fear of offence. But that’s a minor point capable of resolution.
Tell It Slant manages, though its detailed nuance, to achieve a mature understanding of PR, working relationships, politics, and the press. All without plumbing the depths of a time-honoured standpoint, where everything associated with the art of the hidden persuader needs to be absolutely fabulous – a clever balancing act!
Photograph Benjamin Graham
Produced by Merry Spinsters
Tell It Slants plays at The Hope Theatre 25 Feb - 14 March 2020
7:45 pm
£15/12
Tickets: https://www.ticketsource.co.uk/thehopetheatre/tell-it-slant/e-yoaxde
Alia Sohail Cliodhna McCorley Erica Miller Frank David Joshua Jewkes Maev MacCoille Merry Spinsters Tell It Slant The Hope Theatre The Review Chap