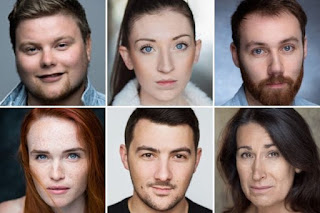 PREVIEW: Netflix and Chill at Drayton Arms Theatre
I was lucky enough to see Tom Stocks' play, Netflix and Chill, last year when it briefly premiered for a couple of nights at Baron’s Court Theatre. Directed by multi- Offie-nominated Luke Adamson, my pull-quote accurately represented my momentary thoughts – ‘clever, smart, funny writing... with intelligent, intuitive direction’.  And with Stocks and Adamson still firmly at the helm, there is no reason not to think things will only have got better!
About to open at the Drayton Arms Theatre on 11 February for an extended run until 29 February, I am sure the production will benefit enormously from the charming performance space afforded by one of London’s best fringe venues. And a less peripatetic performance schedule and existence than last year.
Shamelessly quoting from the press information, ‘The story follows Ben, a working class chef, whose life spirals out of control after trying to rekindle a relationship with his mum. His work, friendships and love life are all tested as his week goes from bad to worse. Netflix & Chill is a dark comedy that explores mental health, toxic masculinity, what goes through your inner monologue when “Netflix & Chilling” along with stories of tragic sexual conquests, Magaluf prostitues, and ejaculating into a bus tray’.
As writer, producer, performer and star of Netflix and Chill, Tom Stocks is without a doubt a force of nature. Coupled with director Luke Adamson, another undoubted force of nature, we are faced with two people whose enthusiasm, work-ethic and drive are irrepressible, together with their unquestionable commitment to male mental health issues, a subject that is intensely personal and germane to them both.
Anyone watching social media recently will also know they have organised a dating fundraiser - with bingo - and a networking event for the theatrical profession, virtually simultaneously as getting Netflix and Chill up and running! Both deserve some sort of standing ovation but a big bravo will have to suffice for the moment!
This production is supported by and in support of The Mental Health Foundation who say ‘75% of suicides are committed by men’ and highlights the pressures men face in modern dating, the toxic world of ‘lad culture’ and the difficulty men face when it comes to talking about their feelings.
As we grabbed a coffee mid-rehearsal, Stocks explained, ‘Large parts of the script are based on a true story. It is great to write about such a taboo subject but in a light hearted way, which doesn’t beat you over the head with the issue. The story is very relatable and will resonate with a younger audience by tackling a number of issues. The show embodies what most men do when trying to talk on serious issues, we deflect it with comedy’.
Taking this as an opportunity to ask him a question that is fundamentally futile but has been nagging at my mind since last summer, I launched, ‘what’s a bus tray?’ Without a moment’s hesitation, and with impeccable comic timing, answered ‘£8.50 from Amazon!’
Now I know!