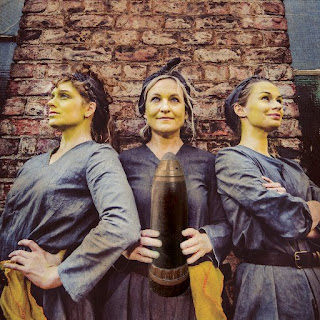 Canary
Watching Fun in the Oven’s production of Canary at the Vaults' Festival, it soon became apparent that this was not any regular performance.  But a unique realisation of a fascinating, forgotten, and sadly ignored chronicle.
This was the story of women who worked in the munitions factories during World War One. Not unsurprisingly, with the men away at war, it was down to a largely forgotten collection of women left behind to do the unsavoury and seriously dangerous job of manufacturing the munitions - doing their bit for the war effort.
Set in a stylish black box set, designed by Posy Jowett, cleverly dressed with simple props and punctuated with film clips, we are introduced to Agnes, Anne and Betty, Britain's unsung war heroines -The Canary Girls.
Performed and created by Robyn Hambrook, Alys North and Katie Tranter we soon become aware that we are not in the midst of any regular piece of theatre but a multi-layered drama featuring mime, dance, music, physical theatre. And even the soundscape drives and enhances the compelling narrative. Many of these diverse attributes must surely be determined and informed, not unsurprisingly, by the wonderfully diverse disciplines inherent in these actors’ background.
Exploring the monotony, danger, and camaraderie inherent in the factory, Hambrook, North and Tranter also draw enormous humour from some dark set-ups. As they chewed cordite - a smokeless explosive made from nitrocellulose, nitroglycerine, and petroleum jelly, used in ammunition – during an air raid, we share the detrimental effects of their ‘euphoric emancipation, forbidden friendship and anarchic dreams’.
Canary is a fascinating, smart and unusual piece of theatre, enhanced by clever and inventive performances from an ensemble happy to push the boundaries of traditional drama.