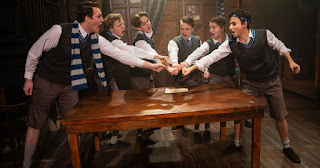 
Based on Thomas Hughes’ 1857 novel, Tom Brown’s School Days, Phil Willmott’s new adaptation is a cleverly-constructed play with music. It sets the timeless classic of public school life amongst a generation who will go on to fight in the Battle of Britain.
Tom Brown, arriving late at Rugby school, is faced with traditions that were ingrained for generations and seemingly informed the culture of public schools? With bullying, fagging and cruelty to the fore, these were all ostensibly character-building customs and ultimately moulding the ‘formative years of the upper-class young men who’d go on to lead the armed forces to victory’.
Willmott’s production cleverly entwines music which ranges from classical hymns to the popular songs of ‘20s and ’30 such as Please Don’t Talk About Me and Nobody Loves You. These are all performed by an intriguingly talented ensemble of young actors, many making their professional debuts. The production contains a myriad of great performances not only from the younger members of the ensemble but also the more seasoned actors.
Hudson Brown as Tom Brown is convincingly charming, credibly forthright with a palpable aura of charisma and bravery. Sam James Page as East handles the difficulties of trust and tradition with undoubted realism and true depth in his portrayal. James Horne as headmaster Dr. Arnold is plausibly drawn as man of great principles, struggling to work within a framework of long-established, institutionalised convention. Ursula Mohan as Sally gives a joyously bravura performance and is pleasure to watch, so long as a questionable sovereign is pressed into her palm!
Without doubt, this is an erudite production, smartly realised and a welcome beginning to the Essential Classics Season 2020 at Sasha Regan’s Union Theatre.