Happily Ever Poofter - a ★★★★ story of a Prince in seach of love! 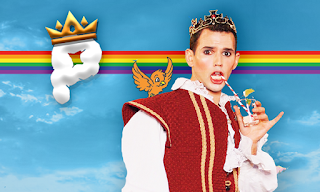 
Once upon a time
In a kingdom far away
There lived a dashing Prince
Who just happened to be gay
He tried dating Cinderella
Sleeping Beauty and Snow White
But deep down in his heart
Something didn’t feel quite right!
And so as Rich Watkins, writer, producer, star and irrepressible force of nature bursts onto the stage with this traditional panto-style prologue, the fourth wall of the theatre is positively smashed and performer and audience are as one.
We are quickly welcomed into the hedonistic, manic, world of Prince Henry, who promptly establishes himself as the only gay in the kingdom and a self-confessed Disney obsessive. From this point on, the Prince has his audience of like-minded citizens on their feet and swearing their allegiance to his world. We are also informed that it takes a community to make a story magical, and without further ado, we are up and running for sixty minutes of miraculous mayhem.
With work still to be done on my knowledge of Disney’s back catalogue, I was grateful for some help from the more well-versed young man sitting next to me, especially with Little Mermaid and Beauty and the Beast - but managed fine with The Lion King, Aladdin, Cinderella and inevitably Frozen!
Cleverly rewriting the lyrics, Watkins uses the key songs to orchestrate his journey to find happiness and true love in this gay firmament, quickly establishing there has never been a gay character in any of Disney’s work. But beware; these reworked lyrics are not for the timorous as the Cinderella classic Some Day My Prince Will Come features the joys of a slow ejaculator and the inherent problem of repetitive strain injury! Aladdin’s Whole New World is also reworked as duet featuring two puppets extolling the benefits of PReP.
Watkins establishes a tremendous bond between himself and the audience and gives a performance that defines bravura and tour de force all rolled into one. Audience participation is rife throughout but not in a gratuitously cruel way - although I am not too sure how happy Piers was when he was set on a stool and quizzed!
Director Denholm Spurr has clearly maintained a firm hand on the production which enjoys tremendous pace, vitality and intelligence even when in the depth of some of the most brilliant absurd and, at times, awkward comedy.
Happily Ever Poofter is, without doubt, clever, camp, racy, insightful and intelligent. It also enjoys endless heart and is definitely a cult classic that will be around for many years to come!
Happily Ever Poofter runs at the King’s Head Theatre from 21 January to 8 February 2020
Tickets from: https://www.kingsheadtheatre.com/whats-on/happily-ever-poofter/book
Denholm Spurr Disney Happily Ever Poofter King's Head Theatre Rich Watkins The Review Chap