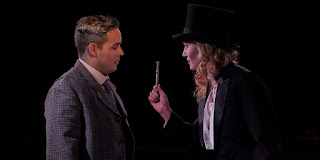 
Playwright Ron Elisha describes a lot of his work as speculative history. His play, Falling In Love Again, purports to be a true story that he discovered when listening to a podcast about the life of Marlene Dietrich. Set on the eve of the abdication of Edward VIII, it is the narrative of how Dietrich paid Edward a visit to his home, Fort Belvedere in Windsor Great Park, in an effort to dissuade him from giving up his throne for his ‘love’ of Wallace Simpson.
Royal fact is always stranger than fiction - the truth is that Dietrich did try to see the King but was turned away. Falling in Love Again moves the narrative on, whereby Dietrich does get in and spends several hours before his abdication with Edward, in an effort to persuade him not to give up the throne.
Elisha weaves a fascinating, original ‘true’ story of Edward and Marlene amazingly alone prior to such a momentous moment in history.
Ramona von Pusch as Dietrich gives an assured, controlled performance as femme fatale, movie star, chanteuse and smart operator - cleverly exploring the nuance of the politics of the time, especially in relation to Germany and Hitler. She also explores on many levels the depth of Edward’s true relationship/love with Mrs Simpson.  Ashton Spear as Edward VIII gives a joyously regal interpretation of a monarch tortured by love, yet never really losing his majestic privilege. His interpretation of the abdication speech was masterful, becoming even more pertinent when Marlene’s singular amendment was added to the text.
Falling In Love Again benefits from Tama Matheson closely-observed direction. He cleverly draws the conceit of both characters as they mutually demand, and ultimately get attention. They were, after all, both royalty in their own realms!
In a week when the monarchy has been under pressure from the actions of Prince Harry and his American wife, Falling In Love Again simply reinforces the fact that there is very little new in life. And especially in the Royal family!