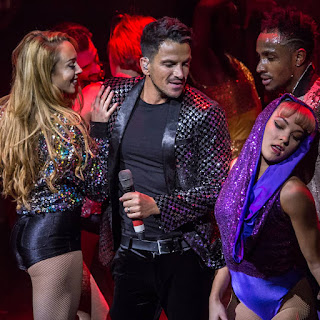 
Thriller Live has now been at London’s Lyric Theatre for nearly 10 years and, with over 4,000 performances, making it one of the longest-running shows in the West End. Cleverly constructed by director and choreographer, Gary Lloyd, Thriller Live celebrates the life, extraordinary talent and calling of Michael Jackson and the Jackson 5.
As part of the final performances before Thriller Live leaves the Lyric Theatre due to refurbishment, the always charming Peter Andre is headlining a series of guest appearances in the show prior to Christmas. And if last night’s show was anything to go by, this was a seriously electric and joyous experience.
Thriller Live has maintained its well-deserved reputation as a musical phenomenon. An extravagant, high powered, tour de force show celebrating the world’s quintessential King of Pop, now ingeniously augmented by the unquestionable star-quality of Peter Andre. But let’s not forget the firmament of star performances that surround Andre. This is, without doubt, an ensemble at the top of their game. Every nuance, movement, song, musical interpretation, piece of choreography is spot-on, authentic and drives the excitement of the piece.
Andre has been smartly interwoven amongst the undoubted stars of the production’s firmament - of which there are many – and shines. He is an artiste with relaxed confidence who elicits a tremendously positive reaction from an audience with a diverse age range. Seemingly anyone from eight to eighty quickly submits to his showbiz charm.
With a company of 28 vocalists and dancers, and a rocking live band, Thriller Live features the Jackson songbook including a non-stop selection of hits, including Can You Feel It, Beat It, Thriller, I Want You Back, Off The Wall, The Way You Make Me Feel, ABC, Smooth Criminal and Billie Jean. And, rest assured, this is by no exhaustive!
Special mention must go to the alternative Michael Jackson vocal stylists who featured so fiercely throughout, particularly David Julien, Hayden Eshen, Florivaldo Mossi and Vivienne Ekwulugo. And Isaiah Mason as young Michael kept it achingly on point the whole time.
If you believe in five-minute warnings, take this as such because Thriller Live leaves this theatre at the end of April 2020. Don’t miss this show and decidedly don’t miss Peter Andre as good just got better!