The Exceptional Case of Whizz and Drex - a ★★★★ piece of smart writing! 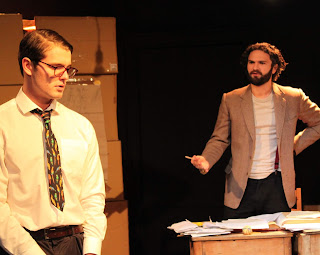 ☆★★★★ The Exceptional Case of Whizz and Drex


The dictionary definition of exceptional is ‘unusually good’. And without a doubt, Fred Kelly’s new play, The Exceptional Case of Whizz and Drex, amply satisfies this meaning. This is an original, challenging and smart piece of writing - both brimming with pace and dynamism, yet full of subtle nuance and detail.
The play tells the story of, not surprisingly, ‘Whizz and Drex who run a parcel storage facility like no other. Pay what you want, but the more you pay, the more likely you are to get the parcel back in one piece. Their enterprise is stalled by visits from a stranger, priceless Prussian stacking dolls and an incident involving mute orphans, a box and a blowtorch.’ Potentially there are lots of spoilers here but rest assured, even with these plot facets, the denouement is cleverly constructed.
Kelly not only writes but also directs the piece with tempo and a filmic velocity - I understand that he is a filmmaker too! He also benefits from exceptional performances from two young actors, Guy Samuels and Louis Strong as Whizz and Drex respectively.
Samuels is worryingly intimidating as Whizz – a controlling bully, who verges on out-and-out cruelty in his dealing with Drex. Cleverly observed by Strong, whose performance contains infinite features, all cleverly betraying degrees of obsession, verging on mania? The strength of their performances ultimately depends on the clever interaction between the two actors and it is engrossing to watch.
Cleverly intercut into the narrative are Nadi (Ellen Paterson) and Chief (Kathryn O’Reilly), both characters that Kelly drip feeds into the plotline without real explanation, their true relevance only becoming apparent at the resolution of the story. Paterson’s role as provocateur and O’Reilly as interrogator are cleverly never fully explained. But both actors inject ambiguity into bright thought-provoking performances.
This is an ensemble that is compulsive to watch as they dextrously explore some worryingly abusive and perverse set-ups. Yet it is nevertheless wonderfully captivating for the audience to share and ultimately discover.


Exceptional Case of Whizz and Drex plays at The Old Red Lion Theatre, Angel, London EC1
until Saturday 7 December only at 3.45 and 8.45 pm


The Whizz and Drex Company are raising money for BulliesOut and would be grateful for any donations.  For further information and to donate contact https://bulliesout.com/