Soho Cinders - a ★★★★★ feel-good, Offie-nominated musical that feels even better!


As you are so often asked in life, ‘what do you want, the good or the bad news?’ The bad news was that Soho Cinders was due to close on 21 December. But the good, even great news, is that it has now been extended until 11 January 2020. And to my mind, that’s perfect timing for a feel-good musical that feels even better the second time around - especially over the festive season and into the New Year!


Sad that some members of the original cast have other commitments but glad news, director and producer, Will Keith has managed to recast with some performers who are, without doubt, a knockout. The entire production also seems a lot gutsier, with an ensemble whose voices seem to blow the roof off!


With music and lyrics by West End royalty Stiles and Drew and a book by Elliot Davis and Anthony Drewe, Soho Cinders is musically and lyrically infectiously entertaining and sharply astute. With a book that contains some of the best one-liners that are genuine laugh-out-loud moments - many of which should come with a health warning, it should not be missed!


Stepping joyously into the roles of Robbie and Velcro are Michael Mather and Livvy Evans, both performers with contagious charisma, loveable likeability and voices to die for! Mather has succumbed to what can only be described as a Jamie New blond makeover and now clearly originates from Newcastle, all of which adds to the originality of his portrayal and cleverly distinguishes his Robbie as fresh and novel. Michaela Stern maintains her tour de force performance as Clodagh, while Hollie Taylor joins her as Dana – sisters from hell but you have to seriously admire their vocal and linguistic dexterity. Their one-liners are worth the price of admission alone! Special mention must go to Dayle Hodge, new to the role of William George. This is a performer with a stunning, show-stopping voice and is a serious and infinitely watchable talent.
With standout performances from Lewis Asquith as James Prince and Tori Hargreaves as his long-suffering girlfriend/fiancée, this is an ensemble entirely on top of their performances - all totally focused, with some excellent ensemble dance routines, sparklingly choreographed by Adam Haigh.


A big bravo must also go to Will Keith, director, producer and all-round charming individual, to whom I was introduced at the end of the show. He has clearly worked assiduously, with others, of course, to achieve this extension. His enthusiasm for his profession and craft is palpable and is to be admired and endlessly nurtured.


So, having been given a second chance, please don’t miss Soho Cinders again. For the record,  I have already booked for the last night!


Soho Cinders runs until 11 January at the Charing Cross Theatre 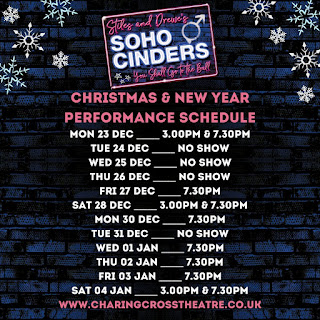