Who They Were - a ★★★ opportunity to explore! 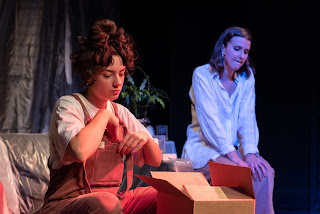 
As a writer Luke Culloty is clearly a man with no paucity of clever concepts and ideas. In his new play, Who They Were, which he also directs at Camden’s Etcetera Theatre for Split Note Theatre, has a window of opportunity of nearly of 100 years to explore.


Shamelessly quoting the short and snappy synopsis, ‘Two immortal women, come back together one hundred years after their relationship ended. They must confront the times then and now. What they were and who they are now.’ With a lot of scope here, Culloty explores it with verve and undoubted vigour as there is no lack of potential opportunity for dialogue in the open-ended set-up.


Whether it is fair to explore the concept further without spoilers is doubtful. But it is wholly reasonable to say the small, taut and unyielding ensemble are breathlessly and relentlessly on point throughout. As a company, Lucy Abraham as Eros, Adela Rajnović as Florence and Ruby Herrington as Joe are laudable exponents of Culloty’s dialogue. And it is fulsome, unyielding and undoubtedly multi-faceted. Concepts such as dementia, economic cuts, depression and even identifying as a post-box or pasty white vegans are amongst some of notions that the centenarians explore as doubtlessly alien concepts. Whilst exploring the dramatic potential of the piece, Culloty has also written some very funny laugh-out-loud moments.


Who They Were is undoubtedly a piece in its early stages of development. Thankfully it does not struggle for ideas as it undeniably stuffed full of cornucopia of sharp, witty and clever inspiration. Whether some of this might be considered overload is questionable. But I do feel the old maxim by architect Mies Van der Rohe ‘less is more’ might be pertinent and worthy of thought.
Who They Were plays at the Etcetera Theatre, Camden Town
until 9 November at 7 pm
Tickets available here: https://www.citizenticket.co.uk/event/who-they-were-written-and-directed-by-luke-culloty/
Adela Rajnović Lucy Abraham Luke Culloty Ruby Herrington Split Note Theatre The Review Chap Who They Were. Etcetera Theatre