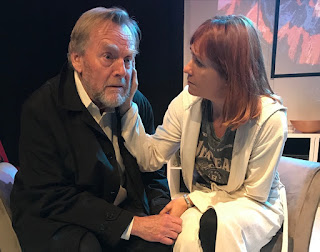 
Freya Alderson is clearly a very brave writer. To develop a play that fearlessly deals with rape, #metoo, dementia, sibling rivalry and generations of actors is a valiant undertaking. The shocking dynamics of family deceit are speedily and cleverly exposed, as we are quickly introduced to the Gibson family.
‘Vivian is on the verge of a career-defining achievement when a shattering sexual allegation about her famous father, Peter, now suffering from Alzheimer's disease, threatens to be revealed. Her social media conscious younger sister Margo is desperate for the truth but as family secrets slowly begin to reveal themselves, Vivian finds herself caught between loyalty to her family and the new world of #metoo.’
At the forefront of this set-up is the actuality that Peter Gibson has advanced dementia. Skilfully played by Eric Carte, he was tremendously plausible as he transitioned through the various stages of his life and his illness. He was the quintessential old-school actor, encompassing the social and sexual mores of the time, whilst shrewdly illuminating the ultimate cruelty of dementia. A fascinating, real and decidedly enlightening performance.
Christina Balmer as Vivian and Maya-Nika Bewley as Margo are the two half-sisters that share Peter as their father. With a generational age difference between them, their priorities in dealing with the shock of the accusation against their father are fascinating to watch. With no spoilers here, Vivian hides a secret and Margo’s views are driven, and riven, by a social media consciousness.
Christopher Jenner-Cole as Ian Semenya is the agent to the stars and fixer. He also enjoys a close family relationship with all the generations of the Gibson family, especially Vivian. As friend, confidante, client and clearly more, he struggles to do what is right, whilst trying to protect his investment in Vivian’s burgeoning success as an actress.
Without doubt, Thread is a multi-levelled exercise in uncomfortable storytelling. Maybe at times too detailed in its exploration of relationships and would benefit from some judicious cuts. But director Veronica Quilligan has, nevertheless, maintained pace and cohesion in a story rich with nuance, detail and uncomfortable heart-break.
THREAD
Author: FREYA ALDERSON
Director: VERONICA QUILLIGAN
Producer: The XV Theatre Company
At The Hope Theatre, Islington, N1 1RL
Plays from 19 November - 7 December 7.45pm
Tickets £15 and £12 concessions
Box Office  www.thehopetheatre.com
Christina Balmer Christopher Jenner-Cole Eric Carte Freya Alderson Maya-Nika Bewley The Hope Theatre The Review Chap The XV Theatre Company Thread Veronica Quilligan