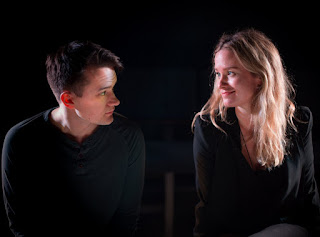 
Holly McFarlane’s new play Oopsy Daisy is a cleverly constructed two-hander with some sharp, erudite writing. With echoes of the famous sex-scene between Donald Sutherland and Julie Christie in the 1973 film Don’t Look Now, Oopsy Daisy is about a famous actress, Jo (Holly McFarlane) and a not-so-famous actor, Jamie (Rory Fairbairn), who decide to have unsimulated sex on a film set during a love scene, with catastrophic results.
Jo and Jamie meet in the back of an Uber Pool car, and soon end up back in her hotel room. She’s a Hollywood starlet/actor - he’s still waiting for his big break. Whisky-drunk and hungry for excitement, they make a decision that will change their lives forever. Suffice to say, the debate of ‘did they or didn’t they’ ends up with ramifications that go far deeper and with greater impact than originally envisaged. But in this day and age, is there really anything such as bad publicity?
Driven by the strength of McFarlane’s writing, Oopsy Daisy has pace, great depth and is truly well-observed. It is also witty and peppered with some clever one-liners and put-downs.
Firmly and concisely directed by Mat Betteridge, McFarlane and Fairbairn enjoy a credible and intimate rapport throughout the piece. This is an intelligent two-hander with fine balance, some great nuanced performances and sincerity. I felt great empathy for both protagonists throughout but was buoyed by the final denouement – but sadly no spoiler here!