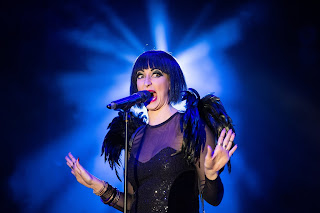 
Clearly working on the maxim, ‘leave your troubles outside’, La Clique, the Olivier Award-winning spectacular is back with a bang. As you walk into the Spiegeltent in Leicester Square, the excitement is palpable and the cares of the day are instantly gone! Roller coaster ride seems an almost tame description of what’s in store. This is cabaret redefined!


Your first impression is the sparkling exciting soundtrack to the evening being provided by La Clique Palace Orkestra with vocals by Kelly Wolfgramm, all under the fierce direction of a band-leader and impresario on top form, David Bates. The use of the classic Andrews Sister's Bei Mir Bistu Shein added serious 1930’s cabaret-style.


But the show was in hyper-gear the moment animatrice extraordinaire, Bennie Dieter appeared on stage from the audience.  A vision in black sequins, feathers and short black cropped hairstyle. Her rapport with the audience quickly  established - all that was missing was a whip. But she managed relatively well without, and soon had the crowd baying obedience to her every whim and command. Her audience participation with four willing souls named Silver Fox, Beardy, Shaven Haven and Mini Beard was intensely amusing but, be warned, if you sit in the first couple of rows – more of which later! Suffice to say Dieter holds together the eclectic ensemble and is herself the mistress of outrage, and linguistically outrageous too! Let’s face it, this is not a show for children!


For the ultimate thrill-seekers, and those willing to sit in the front, special mention must go to Stephen Williams, performing La Clique’s celebrated ‘Bath Boy’ routine. With jaw-dropping acrobatics accompanied by gratuitous splashing, waterproof protection was provided for the audience. Totally unique gymnast, contortionist, dancer and cabaret sensation David Pereira appeared twice, once putting a whole new take on what to do with a supermarket trolley. And the second time, appearing completely naked except a generous lathering of shaving foam. Suffice to say, his ability as an acrobat come in handy when finessing his manscaping - although the gentleman in the front row also lent a generous helping hand with the razor too. You have been warned!


P.S. Special mention must be given to the charming and efficient bartenders who added to the enjoyment of the evening! Bravo!