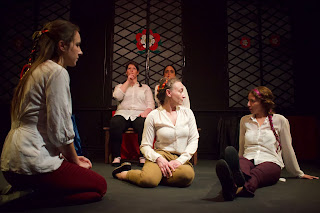 Travelling home from seeing Katheryn Howard at Islington's Hope Theatre, I was engaged in a surprising conversation with a couple of young people about the programme I was reading. Explaining it was about a wife of Henry VIII's, they quickly opined, ‘his wives are sick!'


Thankfully understanding today's vernacular, it was only moments before they were enthusing about the now-global phenomenon and international hit musical that is Six. Sadly they got off the tube before we could talk further but were clearly well-informed about Henry's wives. It is incredible to think how most people may struggle to name them but now, with an infectious musical track in the background, not only is there a generation that can call them but positively revel in their ultimate fate!


So with that hilarious episode in my mind and memories of the ‘history remix' buzzing in my head, we return to Catherine Hiscox's 80-minute play about Katheryn Howard, Henry VIII's fifth wife, her short life and ultimate fate.


Expanded from a short monologue that first appeared at a new writing night at The Pleasance, Hiscock has taken Howard's chronicle as an ‘untold story' of women from history and developed this full-length production.


Unashamedly quoting the synopsis, ‘Set against the shallow and oppressive world of the Tudor court, an all-female cast retells the story of seventeen-year-old Katheryn Howard, fifth wife of King Henry VIII, in this poignant examination of power, truth and blame.


‘Locked within her rooms, while men investigate their conduct, the young Queen and her ladies await the interrogations they know will come.' Howard is a young woman on trial, and clearly, it is not going to end well!


Writer, Catherine Hiscock leads the five-strong ensemble as the titular Katheryn Howard, with a narrative that manages to convey, without longeur, the detail and nuance of life in Tudor court. Cleverly fulfilling the role of a chorus, Francesca Anderson, Natalie Harper, Emmanuela Lia and Srabani Sen drive the narrative, while maintaining a fascinating rapport with the audience. The final days of the Queen became to be anticipated. Still, the interaction with Howard and her courtiers cleverly captured the fraught inevitability of an ultimately frail, tortured and damaged life.


Alex Pearson's taut direction capitalises on Hiscock's smart, insightful writing and tight, perceptive performances from an ensemble on top form. No rousing chorus number at the end but equally enriching!


Katheryn Howard is produced by Goosebite Theatre and is playing at The Hope Theatre until 16 November 2019
Tickets here: https://www.ticketsource.co.uk/booking/select/gTUZKbYEzAXC

☆★★★★ Eigengrau The meaning of the word Eigengrau in the title of Penelope Skinner's play is the colour seen by the eye in perfect darkness. This has some relevance but is not crucial information as the story begins to unfold. Quoting the brief synopsis, ‘this is a play about London. About being lost in urban chaos. About a struggle to find meaning in a world of random encounters and connections'. Featuring four quintessential millennials – feminist activist researching and writing about rape, unemployed dipsy aspiring karaoke singer, overweight fast-food server dealing with personal grief and a one-dimensional, but well-paid, marketing man. And all of whom become intrinsically linked. Skinner writes with high pace and covers many scenarios that create a multi-dimensional dynamic between the four characters. On a day-to-day level, their desperation for a relationship, the mundane yet eternal problem of money, and simply paying the rent, inherent mental health issues and th

★★★★★  Rock of Ages Kevin Clifton gave an impassioned closing speech at the opening night of Rock of Ages where his message was simple – don’t stop believing, theatre is back with a bang after a tawdry eighteen months, and safe in the hands of this decidedly boisterous, upfront and joyous production! Directed and choreographed by the always-superb Nick Winston, Rock of Ages is loud, camp, outrageous, fun and a lot more beside. It features knockout performances from a truly superlative ensemble and, if last night was anything to go by, on top form! Featuring a songbook of over twenty rock classics/bangers, the heart and soul of this show is pulsating even as you take your seats. There is a pent up anticipation in the audience palpably fit to bust! The fourth wall is quickly smashed as Joe Gash (Lonny) plays a rock emcee with vivacity, cheeky charm, jazz hands and underlying danger as he encourage the audience to say hello to the person next to them – panto comes early to Wimbledo

★★★★ Here Come The Boys at The London Palladium

★★★★ Here Come The Boys at The London Palladium 25 May – 8 June 2021 As I travelled to the West End, I realised it had been over fourteen months since I had been on the tube and, more importantly, my last visit to a theatre. What better way to return but to the world-famous London Palladium. Not one of London’s smallest theatres but a friendly beast of a venue. With Covid security always in your mind, the theatre had been precise in their requirements, so was well prepared. Nothing too stringent and handled by a very efficient, humorous team from Lloyd-Webber theatres, I was soon inside and socially distanced in excellent seats in the stalls. But enough of the housekeeping, Here Come The Boys was a return of the sell-out 2019 tour created around some of the Strictly Come Dancing stars - Aljaž Škorjanec, Pasha Kovalev, Graziano di Prima, Robin Windsor and Karim Zeroual. And boy was there a palpable excitement in the theatre as we waited for the show to begin. As a Strictly aficionad