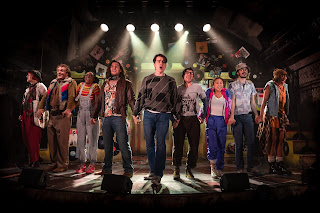 Nick Hornby's quintessential British novel, High Fidelity, sold over a million copies and was not unsurprisingly adapted into a film in 2000 and a Broadway musical in 2006. Sadly in the transformation, it was moved from London to Brooklyn in New York. Maybe not the best idea as the musical had a short run, coupled with a critical mauling! The famous Clive Barnes did note that Amanda Green's 'razzle-dazzle lyrics have a style and grace that zing in the ear.'


Thankfully, they also resonated with producer Paul Taylor-Mills who has cleverly orchestrated some thoughtful and clearly apposite surgery on the piece. Most appropriately bringing it back to London where it belongs. And by fortuitous fate, providing Taylor-Mills with his first musical for his stylish and smart new Turbine Theatre, located in the shadow of Battersea power station.


With music by Tom Kitt, lyrics by Amanda Green, and book by David Lindsay-Abaire, Vikki Stone has joined the creative team as book and lyric adaptor to relocate the tale back to its London/Camden roots. And very fruitfully too!


A bright immersive set, with beanbag and leatherette sofa styling, by David Shields creates Championship Vinyl. Here is where we meet, 'Rob, the thirty-something owner of a London record shop who's mastered the art of finding rare vinyl and losing girlfriends. Laura just dumped him, and Rob is totally moving on. Hopefully. Well, there's a chance it could still work out!' A fascinating coterie of friends surrounds him in the shop and in his private life. Not least five ex-girlfriends, two shop assistants of sorts and a tantric vegan suitor vying for Laura's attention, the scene is brilliant set for a witty, intelligent and, without doubt, hilarious story. Mixed tapes, cassettes and acrylic jumpers notwithstanding!


With a tremendous ensemble who all sing, dance and drive the entire narrative with immense verve, vigour, vitality, coupled with an almost unhealthy obsession for vinyl, there are some undoubtedly standout performances.

Oliver Ormson as Rob is totally engaging and sparkling. With a performance that smashes the fourth wall with a wrecking, sorry demolition ball, he engages with the audience throughout. He is a complete powerhouse, even managing to resemble a gutsy Hugh Grant - maybe?


Shanay Holmes as Laura, is the perfect foil for so much of the action. Whether dealing with the eccentric music obsessives, Dick and Barry played with joyous eccentricity by Carl Au and Barry Durham or Robert Tripolino as Ian, her erstwhile suitor post-Rob. All are wonderfully nuanced and detailed characterisations with some spot-on one-liners that it would be unfair to spoil. Just go!


High Fidelity's score is, without doubt, robust and is a fabulous driver for the piece. Chock full of musical reference for the smart muso and enlightened musical theatre aficionado, we are treated to an eclectic score under the tight direction of Paul Schofield. Many of the songs featured the musical style and vocabulary of different pop/rock artistes or bands. Most notably, Joshua Deever as Bruce Springsteen gave an awesome interpretation of a Springsteen-esque song when providing counsel to Rob on how to be more like The Boss!

The musical references, erudite one-liners and sheer dedication of the ensemble complete the joy manifest in High Fidelity. This is partly the responsibility of Vikki Stone's judicious surgery of book and lyrics but in an even bigger part director/choreographer, Tom Jackson Greaves. This is a production that simply rocks – great music and band, tremendous musical performances and above all an ensemble wholly at one with the piece and themselves!


The final word must be reserved for the Turbine Theatre's artistic director, Paul Taylor-Mills. His achievement in creating, setting up and now running and programming a new theatre- clearly with others including Bill Kenwright- is a significant achievement. He should be applauded loudly. So... bravo and onwards!

High Fidelity is only running until December 7.
But sure we will be seeing more of it!