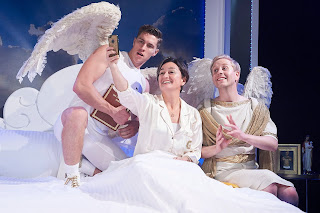 
OMG, David Javerbaum’s An Act of God, currently playing at The Vaults at Waterloo, is intelligent, clever and funny, with an eternity of genuine laugh-out-loud moments. Zoe Lyons, taking on the omniscient role of God, is joyously revelatory and beyond fascinating to watch as an actor, performer, comedian, all-round star and, no doubt, good egg!
Based on a series of tweets, God (@TheTweetofGod) started in 2010 and is still going strong with over six million followers.
Yesterday’s tweet said, ‘It’s #BlackFriday, so be sure to buy enough consumer goods to fill the spiritual vacuum sucking on your soul.’
The simple premise of An Act of God is that God is getting fed up with the Ten Commandments and sets about rewriting/revising them.
‘Yes, I’ve grown weary of the Ten Commandments, in exactly the same way that Don McLean has grown weary of American Pie.’
Having acknowledged the basis of much of source material, it is evident that An Act of God has tremendous pace, is dextrously quick-witted and above all very funny. I understand the script has also been adapted to suit the UK audience with the obvious references to Brexit, Nigel and Boris and celebs now being the chosen people! I stopped trying to write them as they were coming so thick and fast, it was interfering with my ability to laugh!
Returning to Zoe Lyons’ central performance of God, she is on top form handling Javerbaum’s one-liners. From the moment, she walks on stage the fourth wall is smashed and we are treated to some wonderful asides from Lyons’ herself – I wanted the Palladium for the show and we ended up at The Vaults. She also taunts the audience and elicits some almost pantomime-style boos – all great fun! And I believe by the very nature and construct of the piece, it demands a performer of Lyons’ experience, skill and superiority, without whom it would struggle.
God is accompanied by two camp cohorts, also known as archangels Gabriel and Michael, played by Tom Bowen and Matt Tedford respectively. As supports for Lyons’, they were both very enjoyable to watch, especially when Tedford was flitting around the audience and providing the conduit between God and us mere mortals. As an ensemble they were faultless!
Succinctly directed by Benji Sperring, with some smart magic from Scott Penrose, An Act of God is the perfect antidote to traditional seasonal entertainment. I left having seriously laughed and been amused at so many diverse levels – a tremendous night of inventive enjoyment. The new Ten Commandments are decidedly worth a look – and revision!
Book tickets: https://www.kxtickets.com/whats-on/an-act-of-god/book-tickets
An Act of God Benji Sperring David Javerbaum James Seabright Kevin Wilson Matt Tedford Scott Penrose The Review Chap The Vaults Tom Bowen Zoe Lyons