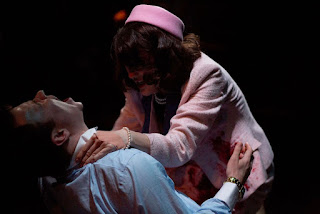 I looked up the definition of a dysfunctional family in the dictionary, and it said, see Matthew Parker's production of The House of Yes. And you must see it, and quickly, as there are only seven more available performances at Islington's Hope Theatre as I write.
In the eighty minutes of this super-stylish production, we ‘meet the Pascals, a family living in the shadow of the Kennedy clan. Outside their Washington D.C. home, a hurricane is raging. Inside, at the eye of the storm, a series of twisted and dangerous events have been set in motion that can only have one destination'.
Shamelessly quoting the plot synopsis, and decidedly without any spoilers, ‘it's Thanksgiving in 1983. Jackie-O is beyond excited to have her twin brother Marty home. He's excited too, but for different reasons. He's bringing home his fiancée to meet the family. Younger brother Anthony is impressed, perhaps worryingly so, and mother Pascal is too zoned out on pills to be paying much attention to anything. The scene is set for an evening of sick machinations and mind-games that will leave the players with scars that will never ever heal'. And boy, are there some warped brilliant setups as the story unfolds. The audience is kept fascinated, agog and, like the man sitting a few seats from me, crying with laughter – unless it was just a bad cold?
Once again, Hope-regular Rachael Ryan has designed a dazzlingly apt representation of faded grandeur with bright golden highlights of fabric and paint emphasising a lifestyle of a by-gone era. And cleverly supporting and underscoring the action throughout is Simon Arrowsmith's expert soundscape.
Director Matthew Parker has assembled a brilliant ensemble that embodies the peculiarities and peccadilloes of the Pascal family.
Gill King as Mrs Pascal, omnipresent, manipulative and unquestionably ruthless as she negotiates what is known by many families as family business. All she needed was a cigarette, and I would say she was channeling her best Bette Davis! Fergus Leathem and Kaya Bucholc as Marty and Lesly, Wendy Macleod's Brad and Janet, who also arrive in the middle of a storm and equally face unrivalled weirdness. Bucholc performance as wronged fiancé is genuinely bewildered and utterly heartfelt. She struggled unsurprisingly to understand what was going on around her as she explored her relationship with both brothers. Colette Eaton as Jackie-O was a beautifully nuanced and controlled performance, decidedly uncomfortable in its detail but fascinating to watch. It was also good to see the immense talent that is Bart Lambert back at the Hope as Anthony. Once again, his performance is captivating as he explores his obsessions and infatuations both physical and emotional, with a performance of sinewy detail and compulsive joy.
Matthew Parker is firmly at the helm of this production for the last time after a five-year tenure as the Hope Theatre's Artistic Director. Exploiting MacLeod's text, whether in tricky, self-conscious or uncomfortable social/sexual situations or capitalising on the laugh-out-loud moments, his directorial dexterity is on top form. Maybe even making camp the new black in this quintessential production?
I am a great believer in the old adage that no one is indispensable. But I sincerely believe Matthew Parker is a thoroughly proper chap, and if I gave awards, he would be in line for the first Chappie! That having been said, I hope his future is golden. He is an enormous talent and with one of the biggest, genuinely positive smiles in the business known as show!
Finally, miss The House of Yes at your peril as it will be talked about for years to come for a whole host of reasons. Go, and you'll know why!
House of Yes plays until Saturday 26 October 2019
For tickets, click here https://www.ticketsource.co.uk/thehopetheatre/e-ydrzla
Bart Lambert Colette Eaton Fergus Leathem Gill King Kaya Bucholc Matthew Parker The Hope Theatre The House of Yes