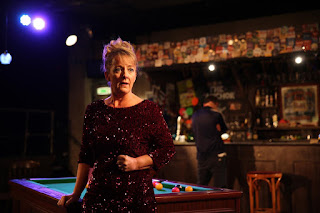 I write this review after the last night of Annie Jenkins' play Karaoke Play at the Bunker Theatre. Producers EJ Martin and Philip Honeywell's Pluck Productions have cleverly piggybacked this superb production onto the back of We Anchor In Hope's mega-realistic pub set by Zoe Hurwitz. Sadly only running for six performances, I am confident it will be back!
As the audience, we are part of the Saturday night crowd at Barry's karaoke bar, Barryoke. Darren (Philip Honeywell) and Perri (Lucy Bromilow) work behind the bar and enjoy a confused, multi-level friendship. Regulars Kelly (Jackie Pulford) and Linford (Christopher Jenner-Cole) are awaiting their call to the stage to sing. We begin to discover their hopes, aspirations, futures in a confused yet supremely nuanced exposition of identity, recognition and love, through the dubious joy of karaoke.
Told in the form of a series of intermixed and ultimately entwined monologues, these gorgeously crafted vignettes by Annie Jenkins are breathtakingly brought to life by undoubted tour de force performances from an elite acting ensemble at their best.
Honeywell's Darren oozes assured yet frightening, even menacing cockiness as he indulges in random sex acts as voyeuristic pleasure, and a perverse reward mechanism. Bromilow's Perri strangely hypnotic rendition of the national anthem is fascinating to watch in its sinewy detail, as is her entire sexually-charged, confused obsession with Darren. Jenner-Cole's gentler realisation of Linford is the perfect balance to the seemingly voyeuristic mayhem going on around him as his obsession with Kelly unfolds. Pulford's Kelly – just like Adele or Prince - is the epitome of vulnerability, beautifully realised in a heart wrenching, original, smart and exceptional performance. And her rendition of Whitney Houston's One Moment In Time is a joy!
These characters are the salt of the earth, even in this reduced salt society!
Director Lucy Grace McCann has dexterously interwoven the linked, yet separate, scenarios between these complex, layered characters and their stories. Karaoke Play is beautifully crafted and realised and without a doubt deserves, and must have, a further incarnation – and soon!