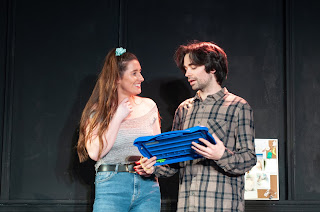 Philip Catherwood's new play, Good Gracious, Good Friday takes place on 22 May 1998. This was the day that the result of the vote on the Good Friday Agreement Referendum was announced.
Set in Belfast, Northern Ireland, we meet ‘four, mostly hung-over, twenty-somethings (who didn't vote) come together, to use the historic outcome as an excuse to drink all over again. Although they claim they have no interest in "that boring news on the telly" - as the night draws on, their true feelings for their country, and each other, will be revealed'.
Ciaran and Eva are long-term flatmates used to watching endless daytime television. Everything from Rug Rats, Catchphrase to Supermarket Sweep as they recover from hanging hangovers in anticipation of doing it again with horrendous concoctions of random alcohol. As Eva expects a visit from her friend Megan, she struggles to recover from the previous night's excesses when Donal, Ciaran's friend also arrives. This is a heady melange of characters set against the backdrop of the referendum result, whether they voted or not, coded identification of religion and ultimately relationships - even the unspoken concept of love.
And all this in a short 70 minutes!
Conor O'Kane and Katrina McKeever as Ciaran and Eva cleverly set up the story as long-term flatmates. Their performances are beautifully paced, with some cleverly nuanced scenes with genuinely laugh-out-loud moments. Their comic timing is exemplary, yet also betrays sensitive warmth as they deal with each other's inbuilt frustrations, confusing relationship status - maybe even verging towards love?
Sharon Duffy and Mario McEntee as Megan and Donal cleverly extend the dynamic of the group with some sharp dialogue and even sharper performances. Both skillfully act as catalysts for discussion of the three Rs - religion, referendum and relationships.
Jessica Arden's direction maintains a positively breathless, even at times farce-like quality – no criticism intended. She smartly explores Catherwood's erudite, funny and unquestionably relevant exposition of youth at the time of the Good Friday agreement. All in all, decidedly talented, cohesive acting from a compelling ensemble.
Sadly Good Gracious, Good Friday is only playing for three performances. But I feel sure this will not be the last time we hear of it, and it will undoubtedly be back – soon!
Good Gracious, Good Friday
plays at the White Bear Theatre, Kennington
until 19 October 2019
For tickets, click here https://www.whitebeartheatre.co.uk/whatson/Good-Gracious%2C-Good-Friday
Conor O'Kane Good Gracious Good Friday Jessica Arden Katrina McKeever Mario McEntee Philip Catherwood Sharon Duffy The Review Chap White Bear Theatre