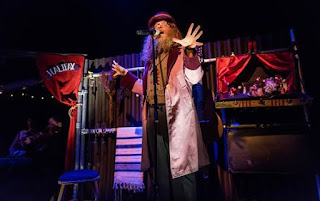 If you are looking for the definition of a theatrical tour de force, look no further than Old Stock – A Refugee Love Story. Playwright, Hannah Moscovitch has created an eighty-minute play with music that tells the almost-true story of her Jewish great-grandparents and their arrival in Canada from Romania in 1908.
With little more than a container as a set, the entire story explodes from within. Ben Caplan leads the small ensemble of actors and musicians, playing the Wanderer - the quintessential master of ceremonies, studiously telling the story with pace, humour and sensitivity while smashing the confines of the fourth wall with tremendous effect.
Behind the doors of the container are revealed a four-piece band, two of whom play Chaim (Eric Da Costa) and Chaya (Mary Fay Coady), immigrants who meet in the queue at Halifax harbour in Canada. They go on to marry, even though both of them have horrendous backstories. Despite this, and there will be no spoilers here, this is a piece permeated with great humour - particularly in adversity – horror, sadness and the ultimate joy of human will.
Da Costa and Coady are pure joy to watch. As performers, they tell their story with enormous strength, charming originality and infinite comedy, even when we are experiencing gut-wrenching horror and sadness. Their performances are, as is their playing, exquisite.
Ben Caplan is undoubtedly in a league of his own. He sings with assured confidence and commands the audience in an almost hypnotic brilliance. Whether extracting unending double entendres from a song about an element of the female anatomy, drawing fun from Jewish customs or simply conveying the horror of the pogrom, this is a stunning, virtuoso performance.
Christian Barry directs with sensitivity,  verve and undoubted panache but Old Stock is by no means an easy watch. At times it is emotionally draining but is nevertheless an original, glorious, smart and must-see exploration of human resilience and survival – unmissable!


Click here for tickets http://wiltons.org.uk/whatson/572-old-stock-a-refugee-love-story-
A 2b theatre company Production