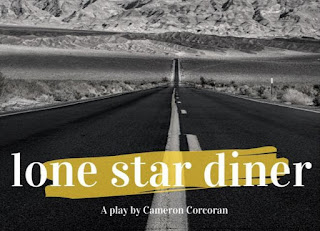 London has a big West End show based around a diner and a waitress, coupled with some jaunty little tunes and a big budget. Yet another American diner has arrived at Clapham's Omnibus Theatre, this time with the sand fresh from the desert under your feet. And seemingly something else as I walked to my seat, nearly tripping over item/items-unknown buried beneath. But there will be no spoilers here!
Cameron Corcoran's Lone Star Diner is set in the middle of New Mexico, at a diner just after that location known as the ‘America dream'. We are quickly drawn into an ostensibly simple story. But all is not what it seems in this cleverly constructed and written drama. Quoting only the briefest production synopsis, ‘June works in a diner in the middle of nowhere. She earns three dollars an hour, and there aren't enough customers to make the tips worthwhile. After a conversation with a customer, June is forced to look at her life: where she's gone wrong and what's she's prepared to do to change that…'
This is a story of discovery, full of nuance and ultimately ruthlessly forthright in its intention.
With only four main characters, the layers of the story are cleverly peeled away. I was quickly fascinated by the development of June – smart, quick, sharp, hard and real. Deftly played by Billie Hamer, it soon became evident we were dealing with a lot more than the facilitator of cups of coffee and hash-browns. Backstories were brought to the fore, and a confusing strength and vulnerability revealed itself as the three other characters developed and became intrinsically entwined.
Seamus Dillane as Cyrus was gloriously languid, poisonously manipulative and absorbing to see develop. Jack Sunderland as Billie-Lee was insistently funny yet tragically engaged but with an overarching local knowledge and obsession, especially concerning June. Adrian Walker-Reilly as Larry is a diner owner, chef and a man with more on offer than a short-order menu.
Mike Cottrell directs with pace and sharpness, that beautifully suits Corcoran's defined, distinct, almost filmic, style. The ensemble deserves high praise, are compelling to watch and elicit real conflicted emotions from the audience. But rest assured Lone Star Diner is engrossing, sharply-observed and, without doubt, a piece of work that has, and deserves a future.

An Off Main Stage  Production