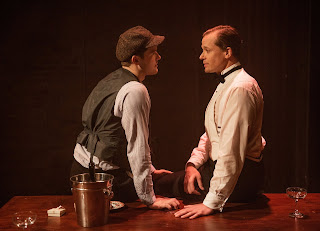 Based on Arthur Schnitzler's 1897 play, La Ronde, Hello Again is a stylish musical that explores a cornucopia of sexual encounters of the close kind. With music, lyrics and book by Michael John La Chiusa, each story is set in a different decade of the twentieth century and focuses on one different, but linked, character over ten scenes.
Set between 1900 and 1999, LaChiusa establishes each vignette in a different musical style ranging from opera, boogie-woogie to disco. Yet manages to create a credible link with all the characters and their sexual experiences. Additionally, he indulged in some now-fashionable gender-swapping by making Schnitzler's Little Miss into the more sexually ambiguous Young Thing. I also felt the distinct undertone of Stephen Sondheim running throughout the piece, but that’s no bad thing!
Untypical for the Union, we are faced with the emptiness of a large stage which only used a large table and chairs. But this just reinforced the smart minimalism of the whole piece. With an ensemble of ten, Hello Again's strength lies undoubtedly with the power and quality of the excellent voices of this sophisticated ensemble.
Grace Roberts as the Young Wife and Keith Merrill as the Husband were engaging as they discovered the intricacies and lies inherent in their relationship. The scene became more pertinent as it transitioned aboard the Titanic as the Husband sailed back to America, enjoying a liaison with the Young Thing, played with great nuance by Phillip Murch. Amy Parker as The Actress and David Pendlebury as The Senator were classic musical theatre joy, and Ellen O'Grady as the Whore was flawless. Hello Again was musically captivating under the direction of Henry Brennan, assisted by Colm Molloy with Bethany Nicholson (Cello) and Nick Anderson (Drums). But regrettably the balance was at times off, and it was difficult to hear some of the sensitive singing!
Director Paul Callen, also responsible for the staging, holds the entire production cleverly together, not least in the final scene as the whole ensemble of characters forms a chic tableau set against the back wall.

All in all, an excellent, pertinent and decidedly intelligent production.