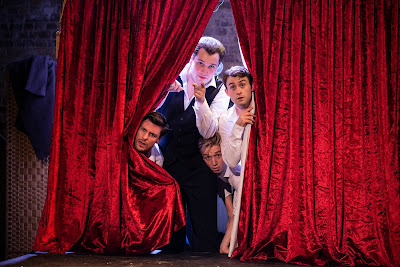 There was a rumour that Bette Midler would be bringing her Broadway production of Jerry Herman's Hello Dolly to London this summer. Sadly this turned out to be untrue, but don't stress! Showtune has arrived at the Union Theatre, and it features all of Jerry Herman's most celebrated songs in a musical revue. And yes, there's even a soupcon of Dolly!
Debutant director and choreographer, Luke Byrne - who I recall as a Cagelle in the recent production of La Cage aux Folles - has fashioned a musical gem of a show. With a stunningly strong ensemble of ten - Aidan Cutler, Alex Burns, Daniel Wallage, Ella-Maria Danson, James Molyneux, Charlotte George, Michael Bowie, Jasmine Hackett, Gabriel Hinchliffe, Samara Rawlins - under the assured musical direction of Henry Brennan, no great Broadway anthem or quintessential Herman lyric goes unsung! It is impressive the richness of sound that Brennan manages to achieve from his single piano, albeit at times slightly overpowering the voices.
I look forward to seeing him, baton in hand, fronting a fuller orchestra sometime soon.
Set in a series of cleverly-designed, backstage dressing rooms, Showtune features all Jerry Herman's greatest hits. Not only songs from Hello Dolly, Mame, and La Cage aux Folles, but also Dear World, The Grand Tour, Milk and Honey, and Mack and Mabel.
I have added below what I hope is a definitive list of the forty or so songs and their provenance featured in the show. As the blurb for the show says, 'no lyric is left unsung in this top-notch retrospective of Herman's phenomenal career in songwriting'. And it is difficult to argue with that!
Special mention must go to Ella-Maria Danson and Alex Burns for their Bosom Buddies duet from Mame. While Daniel Wallage captivates throughout, especially in Little More Mascara and the Song of the Sand duet with Michael Bowie - both from La Cage aux Folles. But this truly is an ensemble show, not least in the guaranteed showstopper Tap Your Troubles Away from Mack and Mabel. If you are not uplifted by this piece of showbiz razzmatazz and ensemble tap-dancing, I suggest you check you're still alive!
Producer Sasha Regan has once again put together a superb production. Luke Byrne has embraced the myriad of classic Herman show tunes and crafted a smart, coherent and totally enchanting confection of Broadway classics. We may be missing Bette Midler this summer, but Showtune delivers Dolly and a lot, lot more in a joyous, what's-not-to-like winner! 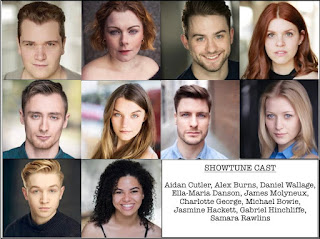 Music and lyrics by Jerry Herman