River in the Sky - a ★★★★ exploration of difficult truths. 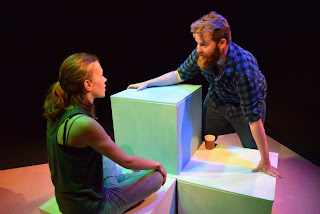 Turn Point Theatre is a new theatre company producing work that focuses on stories about our choices and their consequences. River in the Sky is a new play written and directed by Peter Taylor, playing at The Hope Theatre until 24 August, and deals with the death of a child.

Quoting the show synopsis, 'Young couple, Jack and Ellie were trying to have a family. Then after the sudden loss of their child, they both start to struggle to cope with reality. While one hides away in a dilapidated caravan, escaping to wondrous, childish adventures through their imagination, the other tries to forget the painful event and move on with their day to day life'.
The premise of the piece is grief and how people deal with it. Clearly, Jack (Howard Horner) and Ellie (Lindsey Cross) are experiencing, what must be the worst grief - the loss of their precious son.
Everybody experiences loss/grief at some point in their lives, but the loss of a child is customarily portrayed as the ultimate form of pain. More often than not, this is most caustic and damaging when it comes to the destruction of relationships.
As writer and director, Peter Taylor should be, more than anyone else, acutely aware of the play's premise and nuances. But at times, this is lacking in its delivery to the audience. We are treated to incredible voyages of fantasy with some gorgeous descriptive, captivating prose that ultimately deflects from the real point and becomes acutely esoteric. However, is this really a credible coping mechanism? For Ellie, seemingly yes, but for Jack, I seriously struggle and am not sure this device truly works in the development of the story and its ultimate denouement.
Howard Horner as Jack is valuable and gives a performance that is captivating, appealing and credible. Lindsey Cross, as Ellie plays the part with a confused/confusing strength and plausible vulnerability – both are compelling to watch and elicit conflicted emotions from the audience.
A fascinating exploration of difficult truths.
River in the Sky plays from 6 – 24 August 2019 @ 7.45pm
Tickets Click Here https://www.ticketsource.co.uk/thehopetheatre/river-in-the-sky/e-reblop
Howard Horner Lindsey Cross Matthew Parker Peter Taylor River in the Sky The Hope Theatre Turn Point Theatre