The Chaos Theory - a ★★★★ multi-dimensional experience 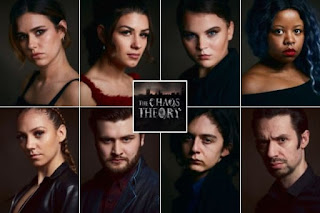 Robbi Stevens is clearly a very busy, dedicated and talented person. As producer, writer, film and theatre director of RAaW’s production of The Chaos Theory, this has been a work of supreme dedication by her and the people around her. Originally staged in 2010 as 180, the work has undergone 40 rewrites over the last ten months and has emerged from an extensive and exhaustive research and rehearsal process.
The Chaos Theory ‘takes us on an unsettling, yet riveting journey, into the underbelly of London and looks at what is hidden behind closed doors’ and explores with gritty realism the concept of ‘What If?’. Fantasising about turning back time and changing the outcomes are Becca, Caroline and Deanna. All ‘caught in a cycle of destructive, unhealthy behaviour which they realise is damaging those around them, they want to change their lives’. And examine what might happen if those desires come true?
Exploring issues such as sexual assault, domestic abuse, poverty, drugs, age and mental health problems, The Chaos Theory is not an easy watch and is, at times, uncomfortable and seriously challenging. But theatre should and must be all of these things.
Expertly directed by Robbi Stevens, the play has a decidedly filmic, multi-dimensional quality, and the intercutting between many different scenarios is expertly crafted. Special mention must also go to Sam Londt and Clancy Flynn – music/sound and lighting respectively - who created a mesmerising adjunct to the look and feel of the entire production.
With a solid ensemble of nine, the level of performance was excellent. Sam Londt as Aiden was menacingly intimidating.  And some of his scenes with Becca, his wife, played by Shelley-Ann Harrison, were worryingly sinister, verging on deranged but splendidly realised. Kieran E Sims as Evan and Dad portrayed warmth and care in both parts and was fascinating to watch.
The Chaos Theory is stylishly challenging with some seriously squalid, dysfunctional setups and equalling difficult denouements interwoven into drama at its very best!