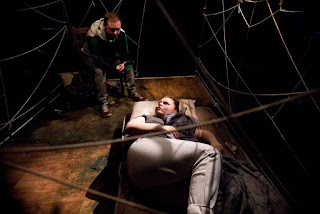 Michael Black has written an emotional, gut-wrenching, moving story of both love and despair with moments of frightening realism, coupled with laugh-out-loud comedy. Who would have thought that a study of different types of biscuits was an act of treachery to your social standing - even when starving? A Rich Tea, Hob Nob or Custard Cream will never seem the same.
Set in an abstracted view of a destitute bed-sit, Esteniah Williams’ intelligent, seedily-detailed design allows the audience a glimpse into the world of Lad and Lass’s squat, and life on the run – living hand to mouth on a diet of Cup-a-Soup, vodka and roll-ups.
As we see their liaison ‘spiralling towards breaking point, they fight and flirt, dream up stories and drag each other down. But caged by circumstance and warped by their own toxic relationship, will they ever be able to escape and survive?’
Running at 60 minutes, Michael Black as Lad and Alana Connaughton gave expertly intricate and intimidating performances as two dispossessed, nervous people living in a confined space and even more confined relationship. But ultimately they loved each other despite the intensity and even hopelessness of their relationship. Without a doubt, they were two well-formed and decidedly well-written characters. And director Matt Strachan draws the dark, worrying and even bizarre from the dynamic of this confused, yet tightly observed, relationship.
Starved is by no means suffering from hunger pangs but is a smart snack-sized repast that satisfies on multi-levels long after the main course has been served.